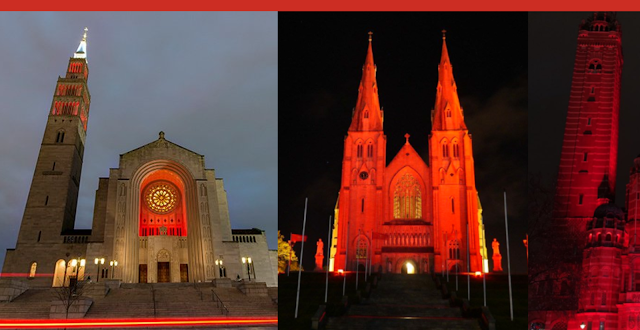 The 23rd of November and the entire month of November is highlighting events to Break the Silence on the persecution of Christians and all faiths, globally. Aid to the Church in Need's ongoing campaign asks you to pledge your prayer and action this #RedWednesday. Red Wednesday sees Churches around the world lit up in red, to break the silence on the persecution of Christians.
Red Wednesday
327 million Christians live in a country where there is persecution and / or discrimination
Our brothers and sisters in the faith are subjected to persecution on a daily basis. We want to make them known, and we want to be in solidarity with them.
To do so, Aid to the Church in Need is organizing Red Wednesday. The event will take place in different locations across Canada, this November 16, 2022.
This day, is intended as a reminder that in 2022, Christians are still suffering persecution and religious discrimination.
What you can do
– Illuminate in red a church or other important building in your area
– Organize a virtual mass for persecuted Christians
– Devote a rosary
– Choose special universal prayers to include in a celebration
– Wear red and invite people to wear red and share your pictures in red on social media channels with the #RedWednesday
– Use social media to publicize the event and raise awareness of the cause using #RedWednesday
– Hold a fundraiser to help the affected communities
Vatican News reports that the Pontifical Foundation Aid to the Church in Need (ACN) is holding its annual international Red Week campaign to draw attention to religious freedom and persecuted Christians across the world.

The campaign is traditionally held in November with buildings and landmarks in several different countries lit up in red, and a series of special initiatives, prayer actions and testimonies.

The “Persecuted and Forgotten?” Report

The annual campaign was launched on November 16 with the official release in London of the “Persecuted and Forgotten?” Report on Christians oppressed for their Faith in 2020–22. The study supplements the annual Religious Freedom Report of the international charity and is prepared by ACN national office in the UK.

One of its key findings shows that, in 75 percent of the 24 countries surveyed the  persecution of Christians has further increased in the past two years.