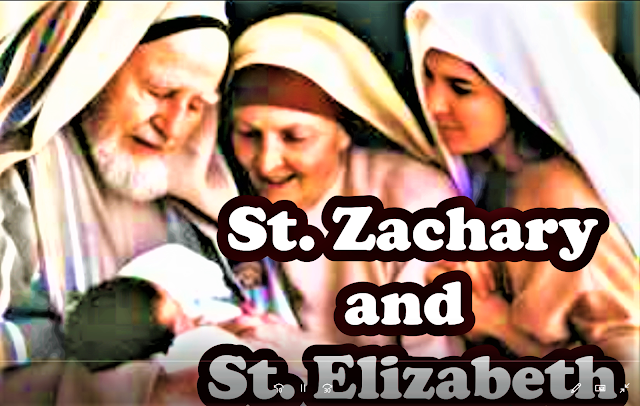 Elizabeth, was the cousin of Mary, the Mother of God. Zachary was her husband. Zachary was told by an angel in a vision that they would have a son and should name him John. Even though Elizabeth was past childbearing age. He doubted this message from the angel and was made dumb. After John's birth, Zachary's speech was restored.
Elizabeth's name comes from the Hebrew meaning "My God has sworn". Elisabeth was the mother of John the Baptist and the wife of Zachary, according to the Gospel of Luke.

St. Elizabeth is the patron saint of the childless, expectant mothers, pregnant.
Zachary, Zacharias, or Zachariah is Hebrew for "the Lord remembers." Saint Zachary was martyred in the Temple of Jerusalem by the Jews. He is famous for the prayer of the Benedictus that he recited at St. John's circumcision and this is repeated during Morning prayer or Lauds of the Breviary. St. Zachary is the patron saint of peace.
SEE Also : Novena Prayer to St. Elizabeth and St. Zachary:  https://www.catholicnewsworld.com/2022/11/saint-november-5-st-zechariah-and-st.html 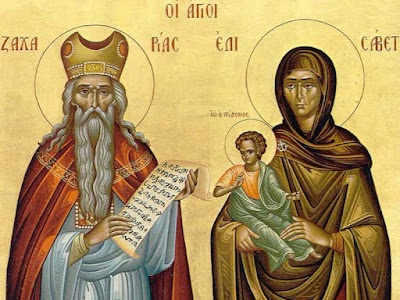 The account of their lives comes from the Gospel of St. Luke Chapter 1:

There was a priest named Zechariah, who belonged to the priestly order of Abijah. His wife was a descendant of Aaron, and her name was Elizabeth.6Both of them were righteous before God, living blamelessly according to all the commandments and regulations of the Lord.7But they had no children, because Elizabeth was barren, and both were getting on in years.
8 Once when he was serving as priest before God and his section was on duty,9he was chosen by lot, according to the custom of the priesthood, to enter the sanctuary of the Lord and offer incense.10Now at the time of the incense-offering, the whole assembly of the people was praying outside.11Then there appeared to him an angel of the Lord, standing at the right side of the altar of incense.12When Zechariah saw him, he was terrified; and fear overwhelmed him.13But the angel said to him, ‘Do not be afraid, Zechariah, for your prayer has been heard. Your wife Elizabeth will bear you a son, and you will name him John.14You will have joy and gladness, and many will rejoice at his birth,15for he will be great in the sight of the Lord. He must never drink wine or strong drink; even before his birth he will be filled with the Holy Spirit.16He will turn many of the people of Israel to the Lord their God.17With the spirit and power of Elijah he will go before him, to turn the hearts of parents to their children, and the disobedient to the wisdom of the righteous, to make ready a people prepared for the Lord.’18Zechariah said to the angel, ‘How will I know that this is so? For I am an old man, and my wife is getting on in years.’19The angel replied, ‘I am Gabriel. I stand in the presence of God, and I have been sent to speak to you and to bring you this good news.20But now, because you did not believe my words, which will be fulfilled in their time, you will become mute, unable to speak, until the day these things occur.’
Saints Saints of November