Wow Famous Actor Gad Elmaleh of France Converts to Catholicism from Judaism and Makes a Film about it! 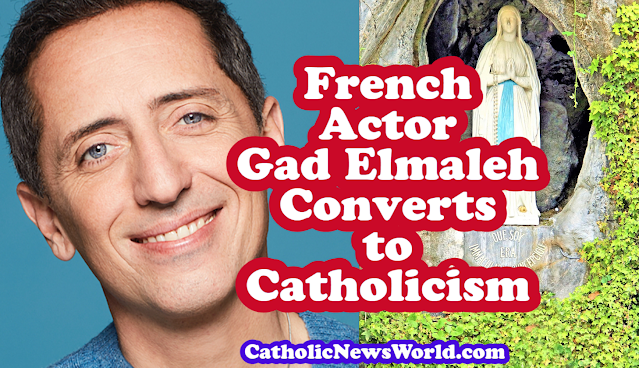 Gad Elmaleh, who was born in 1971, is a Moroccan-French stand-up comedian and actor who is very famous in France, recently announced his conversion to the Catholic faith. He is also a comedian and musician and was voted the funniest person in France. In 2019, he starred in the Netflix series Huge in France.  Gad has 2 children; one son named Noé (b. 2000), with Anne Brochet, and one named Raphael (b. 2013), with Charlotte Casiraghi, who is the great-grandson of Grace Kelly.

His family was Jewish and he explains that his conversion experience began when he was 6 years old. Gad explains that one day, while his father was shopping in the neighborhood, he entered a church.

He said, "I found myself facing a representation of Mary . I was with my sister Judith, and we didn't have the same experience. She, she looked and she came out. Me, I stayed in front of this lady that I didn't know, that I had never seen, and I cried. I felt good. I stayed, I was attached to this face. The first thing I said to myself was: why am I forbidden to enter this place where I feel so good? My sister came in again and pulled me by the arm telling me to get out because my father was coming back soon. My starting point is therefore a ban and a plenitude, a deep joy in the Catholic sense of the term that I discovered much later."

Gad was raised in the Jewish tradition. He says, My parents were not fervent, they did not pray every day, but daily life was marked by holidays, the Sabbath, kosher food and values ​​such as charity, and mutual aid.

At the age of 16, he left to live in Quebec, Canada. There, he regularly went to Saint Joseph's Oratory. But it was much later, in Lourdes, that he realized a connection to Mary. Gad insisted on getting into a production on Saint Bernadette. He then went to Lourdes for the first time and was deeply touched.

At Lourdes he met a couple of practicing Jews with a kid in distress in a medical stroller. The mother said: “We try everything." Gad relates; "This episode kind of gave me permission to take this new spiritual path."

He then spent some time at an abbey of the Cistercian Brothers. He explains, "In this abbey, I found a lot of peace. I attended services, I discussed with the monks, asked for an audience, attended the prayers... I loved the songs, it was sublime. I also read a lot of Saint Augustine."

After his conversion, Gad Elmaleh made a comedic film about his journey that really stars his parents. In this film, Gad relates all the tension between his mysterious attraction for the Catholic faith and his concern for loyalty to his Jewish family.

He tricked his parents into making the film saying, "... I cheated a little... In fact, I told them that I wanted to make a film about the midlife crisis [laughs]. That said, it's also a film about a man's search for meaning and a film about family.

This is why there is this sentence from the Gospel in the film: "And whoever has left, because of my name, houses, brothers, sisters, a father, a mother, children, or land, will receive a hundredfold, and he will inherit eternal life” ( Mt 19:29). Gad says, "I love this sentence so much! It is wisdom."