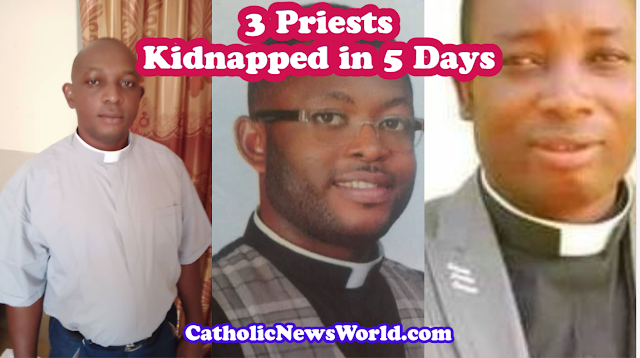 In Nigeria,  three Catholic priests have been kidnapped in 5 days.

On December 17th Father Christopher Ogide,  associate parish priest of Maria Assumpta parish of Umuopara,  diocese of Umuahia,  in the State of Abia,  in southern Nigeria was taken.  Also,  on December 20th,  Father Sylvester Okechukwu,  from the diocese of Kafanchan,  in the state of Kaduna,  in the north-central part of the country,  was kidnapped.  Lastly,  Father Mark Ojotu of the Catholic diocese of Otukpo,  was kidnapped along Okpoga-Ojapo Road in Benue state,  on December 22nd,  according to a statement sent to Fides from the diocese of Otukpo,  in eastern Nigeria.

Monsignor Michael Ekwoy Apochi,  Bishop of Otukpo has asked the faithful to "pray for the rapid release of the priest and all those in the hands of the kidnappers".