Lionel Messi helped Argentina win the FIFA World Cup 2022. He always looks to heaven and points to God after his big wins. They won over France after a 3-3 tie, with 4-2 in penalty kicks. As an Argentine national he captained their team during the 2022 FIFA World Cup in Qatar.

According to a 2019 survey, 62.9 percent of the Argentine population is Catholic; 15.3 Protestant.

This is Messi's 1st World Cup win. Messi made the Sign of the Cross two times after scoring a goal in over time.

Messi assumed captaincy of Barcelona in 2018, and in 2019 he won a record sixth Ballon d'Or. Out of contract, he signed for Paris Saint-Germain in August 2021. An Argentine international, Messi holds the national record for appearances and is also the country's all-time leading goalscorer.

Messi was named by Forbes as the planet’s highest-paid soccer player; earning over 1 billion over the years. 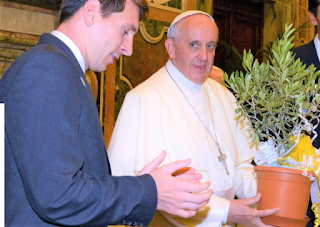 The 35-year-old Argentine team captain has been under contract with Barcelona's team since he was just 13. A native of Argentina, Messi moved to Spain to join Barcelona's youth academy, known as La Masia. In 2004, Messi made his debut with Barcelona, where he went on to become the best player (along with Cristiano Ronaldo) of his generation. He is now part of Paris Saint-Germain.

Messi met Antonella when he was just 5 years old, but officially their relationship started in 2008.

In 2019, Pope Francis, a soccer fan and fellow Argentine, was asked about the player, the pope, in an interview with Spanish news program Salvados, praised Messi as an athlete, but criticized those who hail him as a God.

Throughout Messi's Barcelona career, many fans have referred to him as a God as a result of his footballing ability, creating the nickname D10S, as combination of his shirt number and the Spanish word for God.

The pope added: “People can say he is God, just as they may say 'I adore you' but only God can be worshipped. Those are expressions from people. 'This is a God with the ball on the field' is a popular way for someone to express themselves. “Of course, he is very good, but he isn’t God.”

Messi has said that “Messi is God (or a god)” talk makes him uncomfortable.

Messi, like many athletes, has tattoos: one of Jesus on his upper right arm and a rose window of the famed Sagrada Familia Basilica in Barcelona on his right elbow.

In 2017, Messi told TyC Sports, an Argentine TV network, that if Argentina won the 2018 World Cup, he would celebrate by running 30 miles from his boyhood home in Rosario to the Sanctuary of Our Lady of the Rosary of San Nicolas. The run never happened after Argentina failed to win the World Cup that summer.

Born and raised in Argentina, he moved to Barcelona in his teens to join the football club there. Despite being injury-prone in his early career, Messi has concretely established himself as a premiere footballer, and has been the top paid athlete in his sport for the last five years.

He's deeply involved in several charities, including youth sports, and financially supports a youth football club in his hometown village through his own charitable foundation.

He has been often seen visiting the Sagrada La Familia, Spain. He almost always dedicates his goals to God, by kneeling down and pointing to the sky with both hands, and shows that there is only one God.

Unknown said…
Yes Messi has done it for Argentina in winning the world cup by keeping the faith in our lord Jesus & the mighty blessings of Pope Francis.
This is a great achievement in the eyes of God.
Bless Argentina for this great success.
Thankyou Jesus.
Praiseyou Jesus.
December 18, 2022 at 8:17 PM