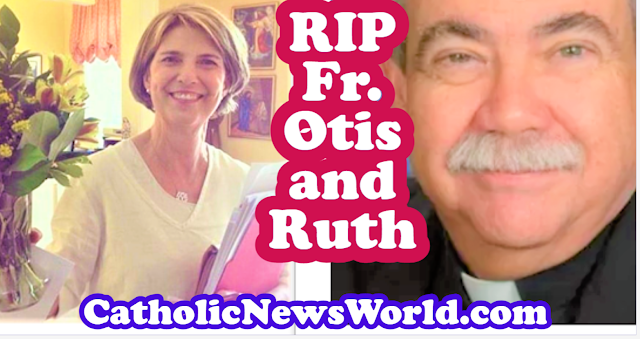 Fr. Otis Young of Covington, Louisiana and his assisstant Ruth Prats went missing.  Later the badly-burned bodies of two people were discovered in Covington, police arrested a man on charges a double-homicide investigation. On November 28th, detectives arrested 49-year-old Antonio Donde Tyson for charges. It was later confirmed by the coroner that both of the victims were indeed Fr. Otis Young and Ruth Prats. The parish and Archdiocese of New Orleans released statements and held a prayer vigil.
SEE ALSO: Priest Fr. Otis Young goes Missing with Assistant as 2 People Found Burned - https://www.catholicnewsworld.com/2022/11/priest-fr-otis-young-goes-missing-with.html
Statement from the Parish: The St. Peter Parish community is devastated to find out that the victims in Monday’s double homicide in downtown Covington are confirmed to be that of Fr. Otis Young, Jr. and Ruth Prats. We are deeply saddened, and ask that you join us in praying for Fr. Otis and Ruth, as well as for their families. Eternal rest grant unto them, O Lord, and let perpetual light shine upon them. May the souls of the faithful departed, through the mercy of God, rest in peace. Amen.

As mentioned before and also noted in the press conference Thursday, the individual arrested has no affiliation to St. Peter Church or School. A Funeral Mass will be celebrated for Fr. Otis Young, Jr. on Monday, December 5, 2022 at 12 noon in St. Peter Catholic Church. The celebrant will be Archbishop Gregory Aymond. Visitation will take place in church from 9 am - 12 noon. The Mass will be live streamed. Funeral arrangements for Ruth Prats will be announced when they are finalized.
Source: https://www.stpeterparish.com/
A Statement from Archbishop Aymond
November 30, 2022
The horror of the events that have unfolded here in Covington is beyond shocking. The pain, sadness, and disbelief that something like this could happen will stay with us but particularly those who are most directly affected for a very long time.
Today as we await confirmation of the second victim, I offer my prayers for both victims of this heinous crime. In a particular way we prayerfully remember Fr. Otis, a beloved pastor who touched the lives of so many with his faith, warmth, and pastoral heart. This is a loss for our church and for the entire community.
I extend my prayerful support and that of the clergy, religious, and laity of the archdiocese to the Covington community and in particular for the parishioners of St. Peter Parish. I also want to extend my gratitude and prayers to the law enforcement personnel, the coroner, and all authorities who have worked so carefully and thoroughly through these very difficult circumstances.
For all those who are hurting and asking how this could happen, may I humbly offer that we turn to our Lord Jesus in this time of mourning. Let us continue to pray for the repose of the soul of Fr. Otis and for Ruth Prats who remains missing, and for both their families and all who are suffering. Let us pray that we may all know God’s love, mercy, and hope.
Sources: https://www.stpeterparish.com/
https://nolacatholic.org/news/a-statement-from-archbishop-aymond-5