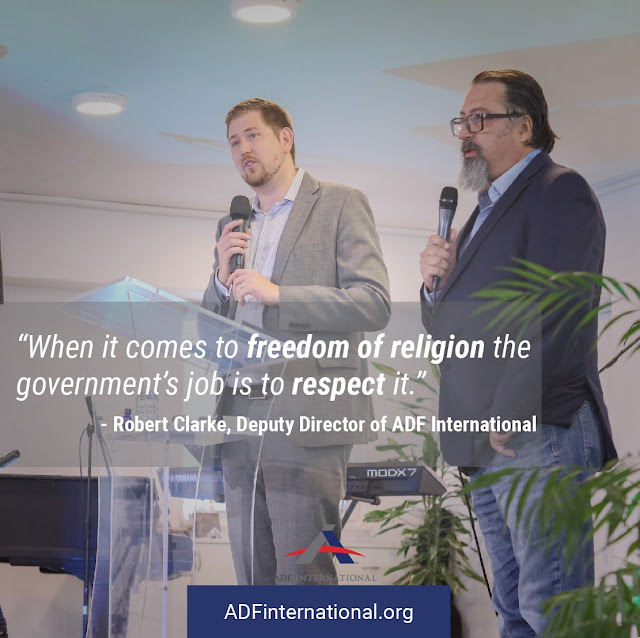 ADF release: Religious Freedom is for Everyone: Europe’s Top Human Rights Court Condemns Bulgaria for Discriminating Against Christians
Evangelical Christians in Bulgaria were subject to a “scaremongering campaign” by government officials to warn children and families away from Protestant religious practice
Bulgarian government labeled Protestant Christians as “sect”, said that attending their church services could result in “mental disorders”, and warned children against them in school lessons
STRASBOURG/BURGAS (13 December 2022) – The European Court of Human Rights has condemned the government of Bulgaria for violating the right to religious freedom of Evangelical Christians in the country. The Court held that a 2008 campaign by government officials to warn children and families away from Protestant churches constituted a violation of human rights.
The case was brought to Europe’s top human rights court on the part of two Bulgarian pastors, Zhivko Tonchev and Radoslav Kiryakov, with the support of ADF International and allied lawyer Viktor Kostov.
“The fundamental right to religious freedom belongs to every person, regardless of faith or denomination. The European Court of Human Rights has affirmed that the government of Bulgaria was wrong to target these Christians with an alarmist campaign designed to suppress the freedom to live out their beliefs. This ruling sends a clear message that government efforts to stamp out religious freedom are unacceptable and fundamentally incompatible with democracy”.” stated Robert Clarke, ADF International director of advocacy and co-counsel in the case.
In reference to the “pejorative and hostile expressions” used by authorities to discredit the church, the Court ruled that the government had “disproportionately infringed” on the religious freedom of the Pastors and their churches.
Pastor Tonchev responded to the judgment by stating: “We are thrilled that the European Court of Human Rights has recognised our fundamental right to religious freedom just in time for Christmas. Government officials had no right to malign our Christian faith, just because we are distinct from the majority religious practice in Bulgaria. With this verdict, the Court has affirmed that religious freedom belongs to everyone. As pastors dedicated to the teachings of Jesus Christ, we rejoice that our rights, and the rights of all who believe, have been recognised”.
YouTube
By loading the video, you agree to YouTube's privacy policy.
Learn more
Load video
Always unblock YouTube
Background
In 2008, the City Council of Burgas, Bulgaria, together with the police, sent a letter to all school administrators in the city. In it they accused Evangelical Christians of “carrying out a massive campaign of agitation,” “tricking new members,” and “disuniting the Bulgarian nation”. They also alleged that there was a danger of suffering “mental aberrations and disorders” when attending Protestant church services. Students in every class were asked to report if they had ever met someone from one of the groups. The government also provided material to the press to generate coverage on what was referred to as its “War on the Sects”.
“When we read the letter, we were shocked because after the fall of communism, we thought that we would be able to share the Gospel freely. At the same time, the media also started to say that we are dangerous cults and sectarians, and that people should be very careful,” recalled Pastor Kiryakov.
“It has been 14 years since Bulgarian officials first labeled these courageous pastors and their churches as ‘sects’, seeking to bar them from freely living out their faith. Most egregiously, the authorities sought to scare families from encountering Jesus Christ through these ministries by way of a scaremongering campaign targeting children. They never received an apology or retraction, but now, with this ruling, justice has been served for all people of faith in Bulgaria,” said allied lawyer Viktor Kostov.
The government never retracted the letter, and national courts rejected the case. The pastors, with the support of ADF International, appealed to the European Court of Human Rights on the grounds that everyone should be able to share their faith without facing government hostility.
As noted by Clarke, “The Court’s ruling offers a pivotal opportunity for Bulgaria, as a post-Communist society, to recommit to human rights for all, including the religious freedom rights of those belonging to a minority faith group. The peaceful coexistence of beliefs is essential for the flourishing of a vibrant democracy, and such diversity must be recognized and protected by the government of Bulgaria”.
Source: ADFinternational.org Release