Happy Birthday Pope Francis! SHARE to Wish Pope Francis a Happy 86th with a Prayer for Him! 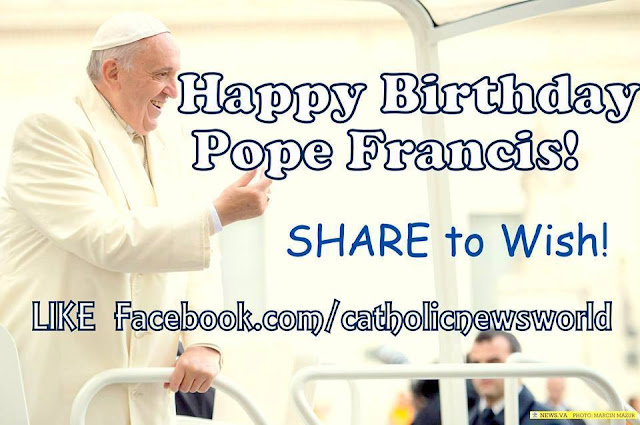 He was born in Flores, Buenos Aires, Argentina in South America.Francis was named Jorge Mario Bergoglio by his parents. He was born on December 17, 1936. Francis became the 266th Pontiff of the Roman Catholic Church on March 13, 2013. He is a member of the Jesuit Order.The Pontiff was ordained a priest in 1969. Jorge was the oldest of 5 children to Mario and Regina of Italy.

PRAYER FOR THE POPE:

Let us pray for our Pontiff Francis. May the Lord preserve him, and give him life, and make him blessed upon the earth, and deliver him not up to the will of his enemies. Let us pray.

O God, Shepherd and Ruler of all Thy faithful, look mercifully upon Thy servant Francis, whom Thou hast chosen as shepherd to preside over Thy Church: grant him, we beseech Thee, that, by word and example, he may edify those over whom he hath charge, so that together with the flock committed to him, he may attain everlasting life. Through Christ, our Lord. Amen