Saint December 15 : St. Virginia Bracelli a Widow who Dedicated herself to the Poor and Founded a Religious Order 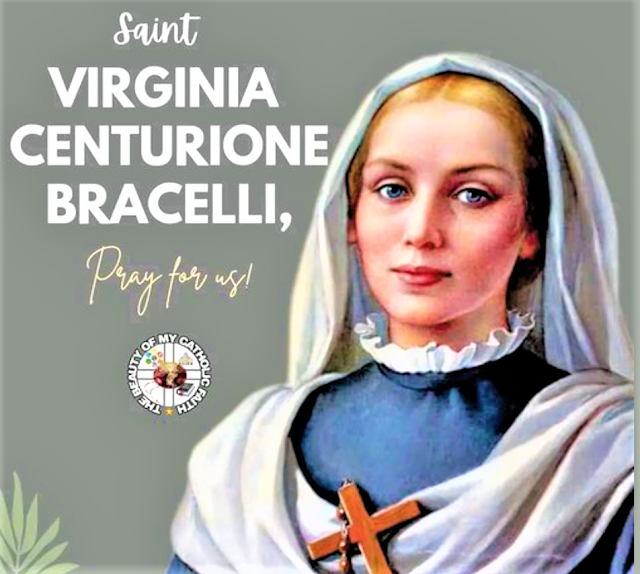 Widower, Virginia Centurione Bracelli(1587-1651)was born on April 2, 1587, in Genoa, from the family of Giorgio Centurione, duke of the Republic in the year 1621-1622, and Lelia Spinola. Both of them were of the ancient noble origin. She was baptized two days after her birth, received her first religious and literary formation from her mother and private tutor.

She soon felt the need for a cloistered life but she had to succumb to her father's strong will and marry Gaspare Grimaldi Bracelli on December 10, 1602. Gaspare’s family was both illustrious and wealthy, but he was wholly taken up with gambling and dissolute life. She gave birth to two daughters: Lelia and Isabella.

The conjugal life of Virginia did not last long. As a matter of fact, Gaspare Bracelli, in spite of the matrimony and the fatherhood, he did not abandon his pleasures, which brought him to shorten his life. Virginia, however, with her great patience, prayer and affection, tried to convince her husband to a modest life. Unfortunately, Gaspare get ill died on June 13, 1607, in Alessandria, thus, enabling him to reach a state of grace and peace with God, relieved and assisted by his faithful wife.

At the age of twenty, she became widow, pronounced her perpetual vow of chastity, refusing the occasion of the second marriage proposed by her father. She lived in her mother-in-lawÂ’s house, taking care of the education and the administration of the goods of her children and dedicating herself through prayer and act of charity.

In 1610, she clearly felt the special vocation “to serve God through the poor”. Although she was strictly controlled by her father and never disregarded the care for the family, Virginia began to devote herself to the needy. She personally helped the poor by sharing half of her wealth or by means of charitable institution.

Virginia conveniently settled the marriage life of her daughters and totally offered herself to the needs of the abandoned children, the aged, the sick and to elevate the life of the marginalized people.

In autumn of 1624-1625, the war between the Liguorian Republic and the Duke of Savoy, supported by France, increasing the unemployment and starvation, led Virginia to accomodate the first 15 abandoned youngs, and then, with the expansion of the refugees in town, enabled her to provide all their needs, specially the poor women.

On August of 1625, with the death of her mother-in-law, she started not only to received the youngs but instead led herself to town, mostly in the disreputable quarters, in search for the needy and in danger of depravity.

To intensify the initiative of accomodating the youngs, precisely at the time of plague and of famine in 1629-1630, Virginia was obliged to rent the empty convent of Monte Calvario, where she transferred on the 13th of April 1631, together with her beneficiaries placed under the protection of Our Lady of Refuge. Three years after, the Institution expanded into three houses accomodating 300 patients. Hence, she thought the opportunity to ask the official acknowledgement from the Senate of the Republic, which was conceded on December 13, 1635.

The beneficiaries of Our Lady of Refuge became for Virginia her excellent “daughters”, with whom she shared the food and clothing. She taught them catechism and train them to work so that they could earned their own sustenance.

Virginia renounced to purchase the Monte Calvario’s convent because it was very expensive, for this reason, she bought two villas next to Carignano’s Hill that , with the construction of the new annex of the Church dedicated to Our Lady of Refuge, became the Mother House of the Institution.

The spirit, which inspired the Institution founded by Virginia, was generally presented in the Rule compiled in 1644-1650. It is confirmed that all the domiciles should form a single Institution of Our Lady of Refuge, under the supervision and administration of the Protectors (noble lay appointed by the Senate of the Republic); there is also the confirmation of the separation between the “daughters” wearing the religious habit, and the “daughters”, who were not wearing habit, but altogether must live - with or without vows – like the most observant monks in obedience and poverty, working and praying. Moreover, they must be ready to give a hand in the public hospital, considering it as a vow.

After the nomination of the Protectors (July 3, 1641), who were considered to be the real superiors of the Institute, Virginia disengaged herself from the government house. She was subdued to their needs and behaved according to their consent even in the acceptance of some needy youngs. She lived as the last Â“daughterÂ” devoted to the household chores, went out in the morning and in the evening to beg for the sustenance of the living. She was a mother to everyone, specially for the sick, giving them most of her availability.

In the past years, Virginia organized a group of social action tight to cure the roots of evil and to prevent ruins: the sick and the disabled were hospitalized in the Institute; the powerful men were sent to work; the women must trained themselves to embroidery frame and seamless stockings, and the children were obliged to go to school.

With the increase of the activities and of the efforts, the collaborators of Virginia declined, particularly the women of the middle and upper class, who had feared to compromise their reputation in dealing with the corrupt people with a guide such as noble and a saint.

Abandoned by the Auxiliaries and by the Protectors of the Institute, for which the government deprived of its power, Virginia, while her physical health was weakening, took the position and became responsible for the sisters in CarignanoÂ’s House. Thus, regaining force in solitude.

On March 25, 1637, she desired that the Republic would choose the Blessed Virgin as their Protectress. She pleaded to the Archbishop of the town, the institution of the “forty hours devotion”, which should start in Genoa at the end of 1642, and the preaching of the common missions (1643). She intervened to settle the common and bloody rivalries, which rose up, for petty reasons, between the noble families and the knights. In 1647, she achieved the reconciliation between the Archbishop See and the Government of the Republic, caused of their conflict in relation to the prestigesÂ’ matter.

Without losing sight to the most desolated, she offered her free time to everybody, independently from the social class, who turned towards her for helped.

Gratified by the Lord with exultations, visions, interior locutions and other mystical gifts, she died on December 15, 1651 at the age of 64. The Holy Father Pope John Paul II proclaimed her blessed on the occasion of his Apostolic Visit in Genoa on September 22, 1985.