Saint December 31 : St. Sylvester the Pope who Converted then Baptized Constantine and Miraculously Cured him of Leprosy 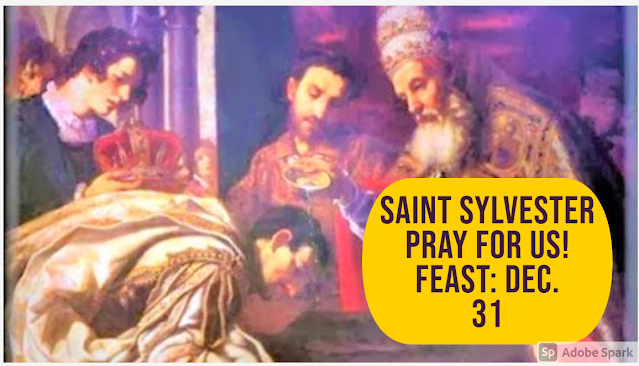 Feast Day: December 31Died:31 December 335 at Rome, Italy
Patron of:Feroleto Antico, Italy
Saint Sylvester I, also spelled Silvester (born , Rome [Italy]—died 335, Rome; Western feast day December 31, Eastern feast day January 2), pope from 314 to 335, whose long pontificate saw the beginnings of the Christian Roman Empire.
A presbyter when elected to succeed Pope St. Miltiades (Melchiades), Sylvester was consecrated on Jan. 31, 314. The most important event of his reign was the Council of Nicaea (May 325), which condemned the Alexandrian Christian priest Arius, founder of Arianism, a heretical doctrine teaching that the Son was neither equal with God the Father nor eternal. While the Roman emperor Constantine I the Great favoured Christianity and was a major controller of its ecclesiastical affairs, neither he nor his immediate successors gave any official recognition to papal primacy over the church. Thus, it was a rare and significant exception when Sylvester was accorded a preeminent role in the Arian crisis. Although invited, he did not attend the Council of Nicaea personally but was represented by two legates, who were treated with great honour and respect yet did not preside at the debates. According to subsequent legend, Sylvester converted and baptized Constantine, who was the first Roman emperor to become a Christian, and miraculously cured him of leprosy, for which the emperor allegedly gave him the Donatio Constantini (Donation of Constantine), a grant of spiritual supremacy over the Eastern patriarchates and over all matters of faith and worship as well as temporal dominion over Rome and the entire Western world. The Donation is now universally admitted to be an 8th-century forgery, but it was important in the development of the medieval theory of church and state. Sylvester is believed to have built at the Cemetery of St. Priscilla on the Via Salaria a church, where he was buried. His relics were transferred in 762 by Pope St. Paul I to the Church of San Silvestro in Capite, now the national church of English Catholics in Rome. Text source Britannica