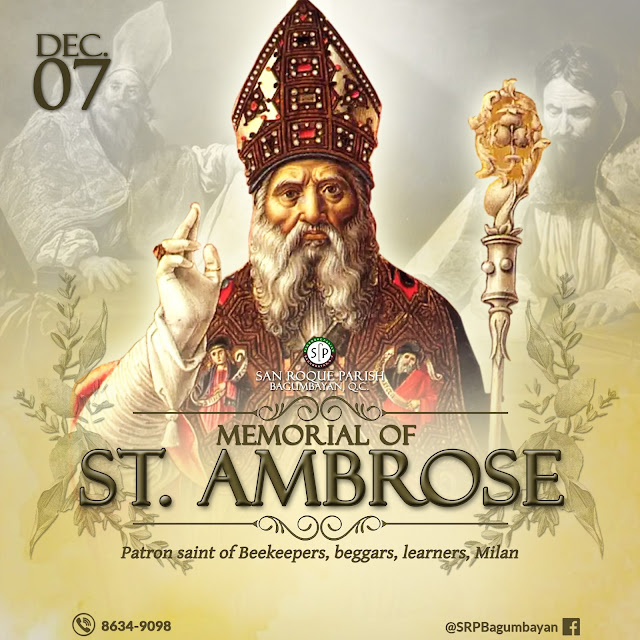 BISHOP, CONFESSOR, DOCTOR OF THE CHURCH
Born:
between 337 and 340 A.D., Trier, Germany
Died:
397 A.D.
Major Shrine:
Basilica of Sant'Ambrogio, Milan, Italy where he is buried
Patron of:
Bee keepers, bees, candle makers, domestic animals, French Commissariat, learning, Milan, Italy, students, wax refinersBishop of Milan from 374 to 397; born probably 340, at Trier, Arles, or Lyons;
Died 4 April, 397.
He was one of the most illustrious Fathers and Doctors of the Church, and fitly chosen, together with St. Augustine, St. John Chrysostom, and St. Athanasius, to uphold the venerable Chair of the Prince of the Apostles in the tribune of St. Peter's at Rome.
Beautiful Prayer of St. Ambrose : O loving Lord Jesus Christ, I, a sinner, not presuming on my own merits, but trusting in Your mercy and goodness, with fear and awe approach the table of Your most sacred banquet. For I have stained both my heart and body with many sins, and have not kept a strict guard over my mind and tongue. Wherefore, O gracious God, O awful majesty, I, a wretched creature, entangled in difficulties, have recourse to You, the fount of mercy; to You I fly for healing and take refuge under Your protection, and I ardently desire to have Him as my Savior whom I am unable to face as my Judge. To You, Lord, I show my wounds, to You I lay bare my shame. I know that my sins are many and great and on their account I am filled with fear. But I trust in Your mercy, which is endless. Look down on me, therefore, with the eyes of mercy, Lord Jesus Christ, eternal King, God and Man, crucified for men. Hear me, for my hope is in You; have mercy on me, for I am full of sin and wretchedness, You who never cease to let flow the fountain of mercy. Hail Victim of Salvation, offered for me and for all mankind on the tree of the cross.