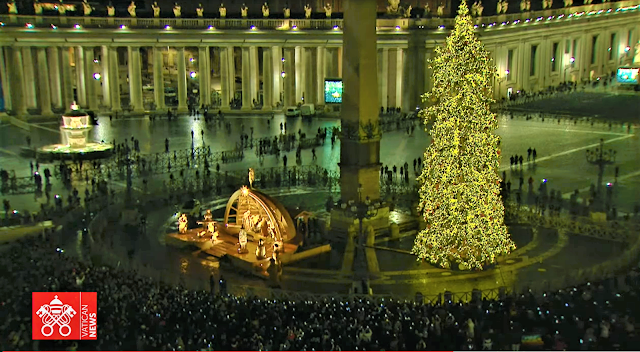 Magical Moments at the Vatican as the Christmas Tree and Nativity are Lit and Inaugurated. Cardinal Fernando Vérgez Alzaga and Sister Raffaella Petrini, respectively President and Secretary General of the Governorate of Vatican City State,  inaugurated the Nativity Scene and lit the Christmas tree installed in St. Peter's Square.
The lighting of the Christmas tree was attended by the Bishop of Trivento, Claudio Palumbo; and the mayor of Rosello, Alessio Monaco, among others.

The ceremony occurred on December 3rd. Due to heavy rain and thunderstorms, the celebration took place inside Vatican City’s Paul VI Hall with a video live-stream from St. Peter’s Square of the Christmas tree lighting. Children at the "La Quadrifoglio" psychiatric rehabilitation center made the ornaments. Some decorations of the tree were produced by elderly patients from the "Sant'Antonio" care center in Borrello, Italy, and schoolchildren from Pizzoferrato, Quadri, and Villa Santa Maria.

The nativity scene is made of life-sized figures hand carved out of alpine cedar trees from Italy’s northeasternmost region, Friuli-Venezia Giulia.The Holy Family and three angels were handmade by artists from Guatemala in their tradition with large golden crowns for the Virgin Mary and St. Joseph.

According to a statement from the Vatican's Governorate, the 2022 Nativity Scene was offered by the northern Italian village of Sutrio, in the province of Udine in the Friuli-Venezia Giulia region.
The nativity scene and tree in St. Peter's Square will remain on display until the conclusion of Christmas time, which coincides with the Feast of the Baptism of the Lord, Sunday, 8 January, 2023.
Source: Edit from Vatican News