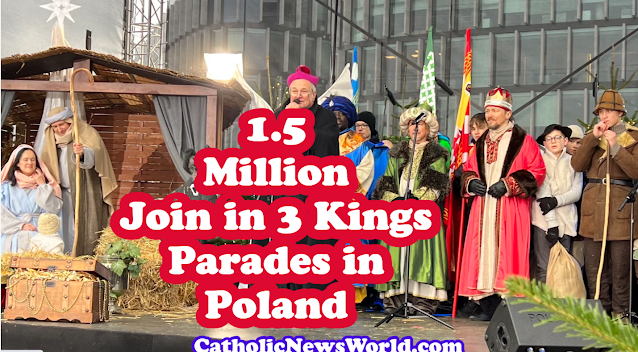 1.5 million participants in more than 750 cities took part in the remarkable Epiphany parades - Pope Francis even mentions the Polish tradition in the Angelus prayer. They also had Christmas carols in the Ukrainian language.
The Polish Catholic Bishops' Conference reported this in a press release.
"I also think of the 'Parade of the Three Kings' that is taking place in so many cities and villages in Poland today." Pope Francis said after the Angelus prayer on the Feast of the Epiphany. “Let us be guided by the star!” was the motto under which the 15th Epiphany procession took place in more than 750 cities in Poland and around the world, with a record number of around 1.5 million participants. It is the largest street nativity scene in the world. The main event took place in Warsaw.
The main event took place in Warsaw. According to the organizers, about 80,000 people attended. “Discovering God in the everyday and ordinary is greater than discovering America; blessed is he who is able to seek and ask,” said Auxiliary Bishop of the Warsaw Archdiocese, Michal Janocha, who spoke at the Warsaw parade. Bishop Janocha also addressed in Ukrainian the numerous Ukrainian mothers with their children gathered in Warsaw. “We wish you and your Homeland a peace stronger than war. We wish you and your Homeland hope that is stronger than death. Glory to Ukraine,” said the bishop.
This year in Warsaw, carols were sung in Polish and Ukrainian. Refreshments included the distribution of Ukrainian Christmas Eve dishes. The presidential couple greeted the participants of the parades in Poland and abroad in a special letter. Polish President Andrzej Duda stressed that the Parades contribute to the revival and popularization of Polish nativity and carol traditions in the 21st Century, thus strengthening identity and family ties by boldly manifesting the Christian faith on the streets and squares of Polish cities.
This year's novelty was the opportunity to submit letters written by children to the infant Jesus in the Bethlehem stable. On February 2, a Mass will be celebrated in the intentions contained in these letters. The Three Kings Parade counts among the largest street nativity plays all over the world. In 2022, it was attended by some 1.2 million participants in 668 cities in Poland and on four continents. Colorful processions passed through the streets in Ecuador, the United States, Rwanda, Cameroon, Zambia, and Chad, among others.
Photos Polish Catholic Bishops' Conference