Ordinary Time Explained - The Church has Begun a New Liturgical Season - 5 Things to Know and Share! 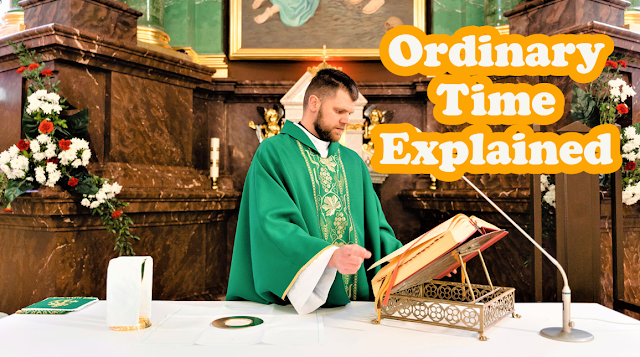 A New Liturgical Season has begun - it's called Ordinary Time:1. In the Roman Rite, the Feast of the Baptism of the Lord, which occurs on the Sunday after the Solemnity of the Epiphany of the Lord (6 January), begins Ordinary Time and ends the Season of Christmas.
2. The weekdays that follow the Feast of the Baptism of the Lord belong to the first week of Ordinary Time and this continues until the Tuesday that precedes Ash Wednesday (Feb. 22 in 2023). After Eastertide the Ordinary Time resumes on the Monday after the Solemnity of Pentecost (May 28th in 2023).
Depending on where the first Sunday of Advent falls between 27 November and 3 December, Ordinary Time may have 33 or 34 weeks.
3. Besides the times of year that have their own distinctive character, there remain in the yearly cycle thirty-three or thirty-four weeks in which no particular aspect of the mystery of Christ is celebrated, but rather the mystery of Christ itself is honoured in its fullness, especially on Sundays.
4. Ordinary Time, originating from the Latin: Tempus per annum, is the part of the liturgical year in the liturgy of the Roman Rite, as revised in 1969.  The word "ordinary" as used here comes from the ordinal numerals by which the weeks are identified or counted, from the 1st week of Ordinary Time in January to the 34th week that begins toward the end of November.
5. It occurs apart from the two great seasons of Christmastide and Eastertide, or their own preparatory seasons of Advent and Lent.
Ordinary Time thus includes the days between Christmastide and Lent, and between Eastertide and Advent. The liturgical color assigned to Ordinary Time is green. The last Sunday of Ordinary Time is the Solemnity of Christ the King.
Sources: https://www.liturgyoffice.org.uk/Calendar/Info/GNLY.pdf and Wikipedia