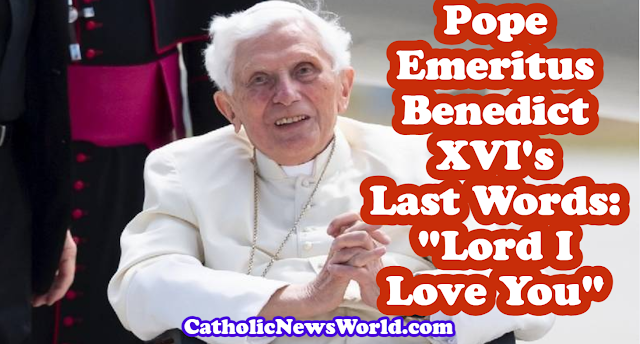 According to Vatican News, Pope Francis was the first visitor to his deathbed.    "Signore ti amo!" (Lord, I love you) were apparently the last words of Pope Emeritus Benedict XVI before he died on December 31st in the morning. This version is corrected from the Vatican after a credible report by La Nacion's veteran journalist which indicated he said Jesus, I love you. He said them in Italian; earlier reports said they were in his native language.
UPDATE: The last words of Pope Emeritus Benedict XVI were heard in the middle of the night by a nurse. It was around 3 in the morning of 31 December, several hours before he died. Joseph Ratzinger had not yet entered his final moments, and at that time his collaborators and assistants were alternating in his care. With him at that precise moment there was only one nurse who did not speak German. "Benedict XVI," his secretary, Archbishop Georg Gänswein, recounts emotionally, "with just a whisper of a voice, but in a clearly distinguishable manner, said in Italian: 'Lord, I love you!' I was not there at the moment, but the nurse told me about it shortly afterwards. These were his last comprehensible words, because afterwards he was no longer able to express himself."
"Lord, I love you!", are words that are like a synthesis of the life of Joseph Ratzinger, who for years now had been preparing for his final, face-to-face encounter with the Creator. On 28 June 2016, on the 65th anniversary of the priestly ordination of his now emeritus predecessor, Pope Francis had wished to emphasize the "underlying characteristic" that marked the long history of Joseph Ratzinger's priesthood. Pope Francis said: "In one of the many beautiful passages you have written on the priesthood, you emphasize that, at the hour of Simon’s definitive call, Jesus, fixing his gaze on him, essentially asks only one thing: 'Do you love me?'. How beautiful and true this is! (Vatican News)