Pope Francis sent his blessing for those participating the Washington, DC, March for Life. Those who participate either in person or virtually can obtain a plenary indulgence granted by the Holy See. (See below video)

On the occasion of the National Prayer Vigil for Life, Archbishop Christophe Pierre, apostolic nuncio to the United States, read the letter from Cardinal Pietro Parolin, Vatican Secretary of State, who conveyed greetings on behalf of Pope Francis. In the letter, the Holy Father expressed his deep gratitude “for the faithful witness shown publicly over the years by all who promote and defend the right to life of the most innocent and vulnerable members of our human family.”

WATCH the Vigil Virtually Below -

The national March for Life is a annual pro-life gathering with tens of thousands on the National Mall and march on Capitol Hill on the anniversary of the Supreme Court’s 1973 Roe v. Wade ruling which legalized abortion in all 50 states.

On Jan. 17 approval by the Apostolic Penitentiary of the Holy See of a plenary indulgence was granted (total remission of temporal punishment for sin) in connection with the 2023 March for Life in Washington and accompanying events Thursday, January 19 and Friday, January 20. The plenary indulgence would be available for all those Catholics who participate either (1) in person or (2) virtually (online, TV, radio) and who have “the disposition of detachment from any sin, with the intention of fulfilling as soon as one is able, the three customary conditions” for plenary indulgences: 1) Sacramental Confession; Eucharistic Communion, and prayer for the intention of the Holy Father (all as soon as possible within 20 days). 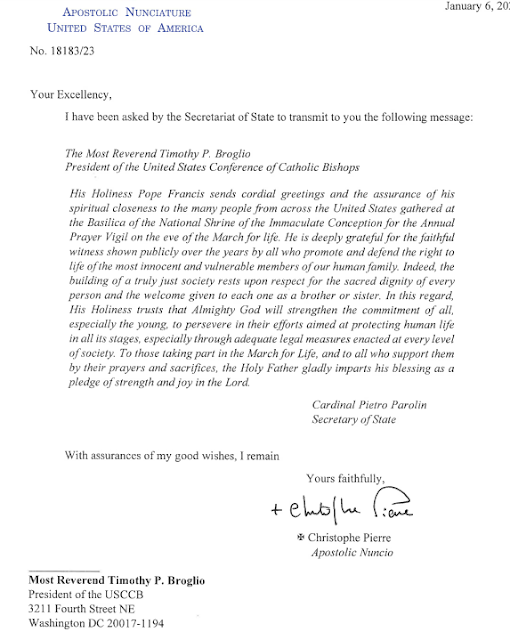