Saint January 15 : Saint Paul the Hermit - the 1st Hermit who was Fed Daily by a Bird and Died at 112 Years Old 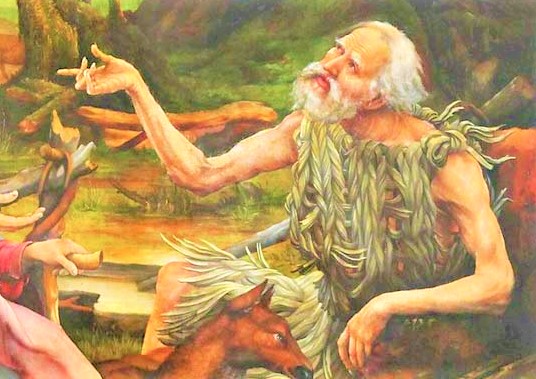 Paul was reportedly born in Egypt, where he was orphaned by age 15. He was also a learned and devout young man. During the persecution of Decius in Egypt in the year 250, Paul was forced to hide in the home of a friend. Fearing a brother-in-law would betray him, he fled in a cave in the desert.
When a young man of sixteen Paul fled into the desert of the Thebaid during the Decian persecution. He lived in a cave in the mountain-side till he was one-hundred-and-thirteen. The mountain, adds St. Jerome, was honeycombed with caves. His plan was to return once the persecution ended, but the sweetness of solitude and heavenly contemplation convinced him to stay.

He went on to live in that cave for the next 90 years. A nearby spring gave him drink, a palm tree furnished him clothing and nourishment. After 21 years of solitude, a bird began bringing him half of a loaf of bread each day. Without knowing what was happening in the world, Paul prayed that the world would become a better place.

Saint Anthony of Egypt attests to his holy life and death. Tempted by the thought that no one had served God in the wilderness longer than he, Anthony was led by God to find Paul and acknowledge him as a man more perfect than himself. The raven that day brought a whole loaf of bread instead of the usual half. As Paul predicted, Anthony would return to bury his new friend.

St. Paul asked St. Anthony to fetch the cloak given him by "Athanasius the bishop" to bury his body in it. St. Paul died before he returned.

St. Antony wrapped the body of Paul with the cloak and carried it outside, chanting the hymns and psalms of Christian tradition. But sadness came over Antony, because he had no spade to dig the grave. His mind was shaken, turning this way and that of a solution. For if I should go back to the monastery, he said, it is a three day journey, if I stay here, there is no more that I can do. Let me die therefore and fall beside your soldier, Christ, let me draw my last breath.

But even as he pondered, behold two lions, came coursing, their manes flying, from the inner desert, and came toward him. At the sight of them, he was filled with fear, then turning his mind to God, he waited undismayed, as though he looked on doves. The lions came straight to the body of the holy man, and halted by it, wagging their tails, then couched themselves at his fee, roaring with all their might; and Antony well knew they were lamenting the holy Paul, as best they could. Then, going off a little way, they began to scratch up the ground with their paws, vying with one another in throwing up the sand, until they had dug a grave large enough for Paul’s remains; and immediately, as though to ask a reward of their work, they came up to Antony, with drooping ears and down bent heads, and began licking his hands and his feet. He saw that they were begging for his blessing, and pouring out his soul in praise to Christ for that even the dumb beasts feel that there is a God, “Lord,” he said, “without Whom no leaf appears on the tree, nor a single sparrow falls upon the ground, give unto these even lions as Thou know.”

Then, motioning with is hand, he signed to them to depart. When they had gone away, he bowed his aged shoulders under the weight of the holy body, and laying it in the grave, he then gathered the earth and mounded  it over the grave. At day break Paul claimed for himself the tunic which Paul had woven out of palm-leaves. Then returning to the monastery, he told the whole story to his disciples in order as it happened.

Thought to have been about 112 when he died, Paul is known as the “First Hermit.” His feast day is celebrated in the East; he is also commemorated in the Coptic and Armenian rites of the Mass.