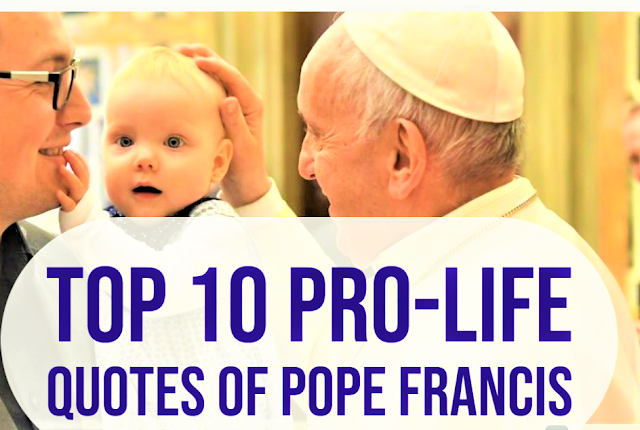 1. “The right to life is the first human right. Abortion is killing someone that cannot defend him or herself.” – Cardinal Bergoglio with Rabbi Abraham Skorka in a book.
2. “All life has inestimable value even the weakest and most vulnerable, the sick, the old, the unborn and the poor, are masterpieces of God’s creation, made in his own image, destined to live forever, and deserving of the utmost reverence and respect.” – Message to Catholics taking part in annual Day for Life in Britain and Ireland July 28, 2013 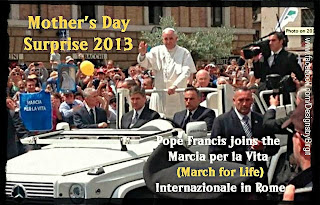 3. “Let’s say ‘Yes’ to life and ‘No’ to death.” – Message to Catholics taking part in March for Life in France Jan. 19, 2014.
4. “Every child who, rather than being born, is condemned unjustly to being aborted, bears the face of Jesus Christ, bears the face of the Lord, who even before he was born, and then just after birth, experienced the world’s rejection. And every elderly person…even if he is ill or at the end of his days, bears the face of Christ. They cannot be discarded, as the ‘culture of waste’ suggests!” – Speech to Catholic healthcare professionals and gynecologists Sept. 20, 2013
5. "... it is frightful even to think there are children, victims of abortion, who will never see the light of day; children being used as soldiers, abused and killed in armed conflicts; and children being bought and sold in that terrible form of modern slavery which is human trafficking, which is a crime against humanity.” – Speech to diplomats Jan. 13, 2014
6. “The victims of this [throwaway] culture are precisely the weakest and most fragile human beings — the unborn, the poorest, the sick and elderly, the seriously handicapped, etc. — who are in danger of being ‘thrown away,’ expelled from a system that must be efficient at all costs. …It is necessary to raise awareness and form the lay faithful, in whatever state, especially those engaged in the field of politics, so that they may think in accord with the Gospel and the social doctrine of the church and act consistently by dialoguing and collaborating with those who, in sincerity and intellectual honesty, share — if not the faith — at least a similar vision of mankind and society and its ethical consequences. – Speech to a delegation from the Dignitatis Humanae Institute Dec. 7, 2013
7. “Since everything is interrelated, concern for the protection of nature is also incompatible with the justification of abortion. How can we genuinely teach the importance of concern for other vulnerable beings, however troublesome or inconvenient they may be, if we fail to protect a human embryo, even when its presence is uncomfortable and creates difficulties? ” – Laudato Si
8. "Every life counts: from the beginning to the end, from conception to natural death" Tweet Jan.19,2018
9. The fight against abortion is “part of the battle in favor of life from the moment of conception until a dignified, natural end. This includes the care of the mother during pregnancy, the existence of laws to protect the mother postpartum, and the need to ensure that children receive enough food, as well as providing healthcare throughout the whole length of life…” …On science being aware it is human life: “A pregnant woman isn’t carrying a toothbrush in her belly, or a tumor…We are in the presence of a human being.” – Cardinal Jorge Bergoglio in book of interviews “Pope Francis: His Life in His Own Words”
10. "Defend the Unborn Against Abortion even if they persecute you calumniate you set traps for you take you to court or kill you."'
***********************************************
Please SUBSCRIBE to CatholicNewsWorld's Youtube Channel!
Thanks and God bless! www.youtube.com/catholicnewsworld
Catholic Quotes Inspirational Quotes Pope Francis Pro-Life