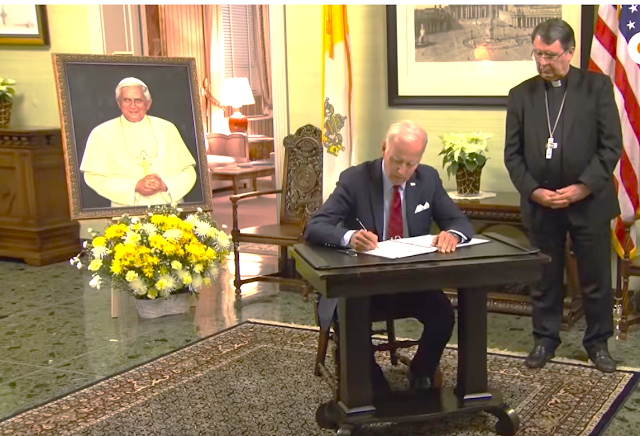 US President Biden on January 5th in the evening made a surprise trip to the Vatican Embassy in Washington, DC, to honor the late Pope Benedict XVI. The pope's funeral was celebrated on the same day.

At the Apostolic Nunciature of the Holy See, the president signed the book of condolences. Benedict died at the age of 95 on December 31st, 2022. President Biden, who is the second Catholic president in U.S. history, spoke with Vatican officials. He said,  “It’s a great honor,” to the nuncio Archbishop Christophe Pierre. “I used to be your neighbor across the street,” he added, speaking of the vice president residence. The U.S. Ambassador to the Holy See Joe Donnelly attended the funeral at the Vatican on Thursday representing the U.S. Biden told reporters on January 4th that he admired Pope Benedict and spent time with him in 2011 as vice president. “He was a great, and it reminded me of going back to theology class. We spoke about Aquinas and about "Summa Theologica" and the whole litany. I found him to be relaxing and very rational,” Biden explained.  “He was a more conservative view within the Catholic realm than I have and … the present pope, in terms of his philosophy, his view. But I admired him. I thought he was a fine man,” the President Biden said.
Sources: The Hill - Reuters - AP