Victims of Attack at Basilica in France, Mother of 3 Says "Tell my children I love them" before Dying - EU Issues Statement 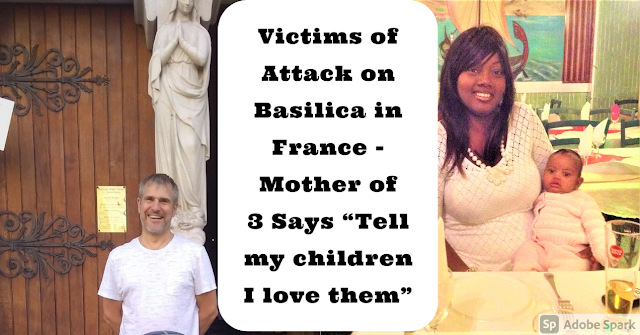 '"Tell my children I love them." Those were the last words of Simone (see photo above), as she was dying after running from the the Islamist attack inside "Notre-Dame" Basilica in Nice, France. At 8.30 am, on October 29, 2020, the sacristan Vincent opened the church basilica. The first two believers to come to prayer were two women from the neighborhood. After 30 minutes all three were dead. The 44-year-old mother of 3 from Brazil, Simone Silva, was seriously injured but, was able to drag herself out of the church into the exterior cafe and told the emergency doctor that she loved her children.
SEE ALSO:

https://www.catholicnewsworld.com/2020/10/breakingnews-3-people-killed-while.html
The sacristan Vincent Loques, age 55, also leaves behind three children. "My sadness is infinite," explained the Archbishop of Nice, André Marceau. Yesterday all churches in the city were closed and placed under police protection. At 3 p.m., the church bells rang across France. The Brazilian Government noted, with great regret, that one of the fatal victims was a 44-year-old Brazilian woman, mother of three, residing in France for many years.
Three people were killed and several others injured in the attack that French President Emmanuel Macron said was an "Islamist terrorist attack".
The attacker, named Brahim Aioussaoi, from Tunisia, was armed with a knife attacked church-goers in the French city of Nice.
President Macron doubled the number of soldiers deployed to protect schools and religious, to 7,000. The French government has also raised its security alert level to its maximum level.
The attack took place inside Notre-Dame basilica and the attacker was shot and wounded. He was taken to hospital.
France’s anti-terrorism prosecutor, Jean-Francois Ricard, said a man and woman were killed inside the church. The third victim, a 44-year-old woman, Simone, who managed to flee, died at a nearby restaurant.
A 60-year-old woman whose body was found at the entry of the church, suffered “a very deep throat-slitting, like a decapitation,” Ricard added. The 55-year-old man, Vincent, also died after deep cuts to his throat.
The attacker shouted "Allah Akbar" as he carried out the attack.
France’s anti-terrorism prosecutor Ricard, said the attacker, was born in 1999. He was carrying a copy of the Qur'an - the Muslim holy book.
In Nice, Daniel Conilh, a 32-year-old bar worker serving in a nearby café, described the scene as it unfolded.
"Everyone ran away, there was shooting. A woman came straight out of the church saying to us: 'run, run, someone has gone down, there's going to be shooting, people are dead'," he recounted, adding that he called for calm as panicked customers fled the café.
Church bells tolled across France at 3pm to show respect for the victims.
The Vatican released a statement saying the Pope was "praying for the victims".
Edited from https://veja.abril.com.br/ and EuroNews
JOINT STATEMENT BY EU COUNTRIES:
Joint statement by the members of the European Council
We, European leaders, are shocked and saddened by the terrorist attacks in France.
We condemn in the strongest terms these attacks which represent so many attacks on our common values.
We stand united and firm in our solidarity with France, the French people and their government - in our common and continued fight against terrorism and violent extremism.
We call on world leaders to work for dialogue and understanding between communities and religions rather than division.
Source: https://www.consilium.europa.eu/fr/press/press-releases/2020/10/29/joint-statement-by-the-members-of-european-council/