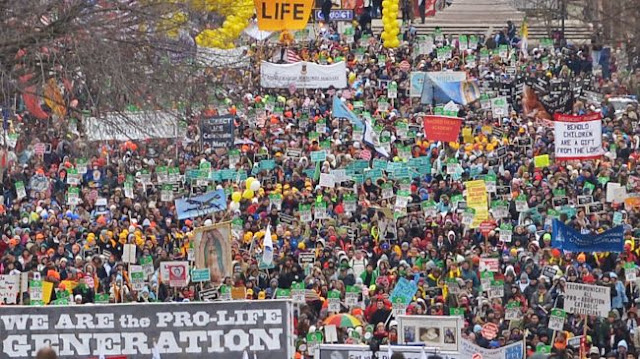 OVER 500, 000 attended the MARCH FOR LIFE in Washington, DC on January 25, 2013. The great crowds marked the 40th anniversary of Roe vs. Wade the decision in 1973 that permitted abortion.  This massive crowd gathered to honor life from conception to natural death. It is hoped that the legislation will soon be changed to end abortion in the US. (IMAGE SOURCE : GOOGLE)

Since 1973 an estimated 55 million babies have been killed by abortion in the USA. There was an overnight prayer vigil in the Basilica of the National Shrine of the Immaculate Conception with thousands in attendance. Cardinal Timothy Dolan, President of the US Conference of Catholic Bishops was present and Cardinal Wuerl. This annual March has become a large event spanning many days and involving talks, demonstrations, prayer, videos and other activities. Many politicians, clergy, religious, youth and leaders partake every year. Martin Luther King's niece Dr. Alveda King also attended and is part of a large movement in support of life. Last year over 400,000 attended. This year noted a particularly strong youth presence. One Catholic College, Christendom cancelled classes so that the entire school could attend.