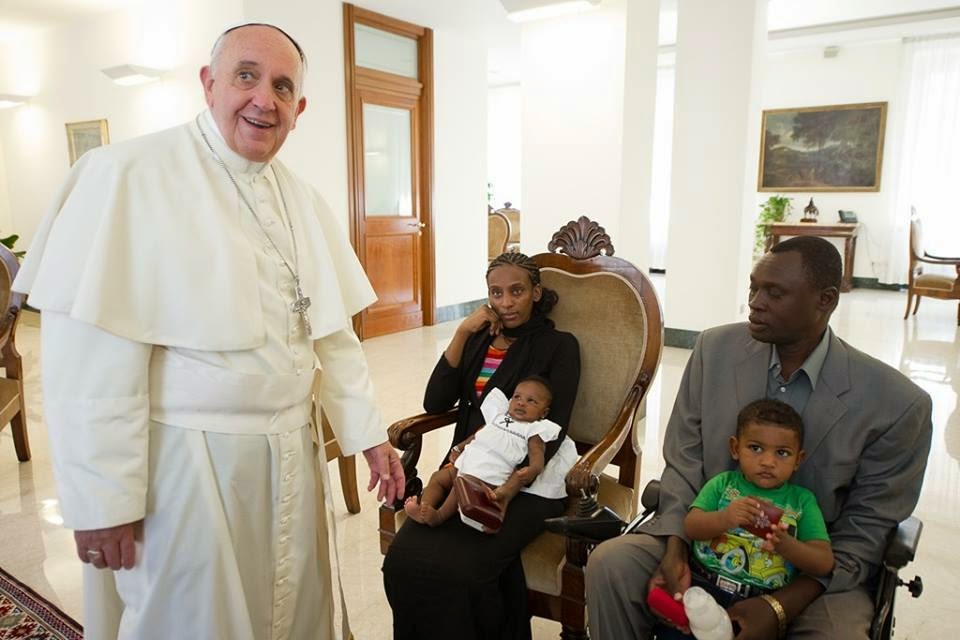 (Vatican Radio) Meriam Ibrahim, the woman who was sentenced to death in Sudan for refusing to renounce her Christian faith, arrived Thursday in Italy and met with Pope Francis in the Casa Santa Marta. During the meeting, she was accompanied by her family: Husband Daniel Wani,  Martin (a year and a half), and Maya, born in prison two months ago.
Her family was accompanied by the Italian Deputy Foreign Minister, Lapo Pistelli, who helped arrange her departure from Sudan and travelled with her to Italy.
The head of the Vatican Press Office, Father Federico Lombardi, SJ, said the meeting took place in a “very serene and affectionate”  environment, and Pope Francis thanked Meriam for her "courageous witness to perseverance in the Faith."
Fr. Lombardi said Meriam thanked the Pope for his prayers, saying they provided great support and encouragement.
The Italian Prime Minister Matteo Renzi had earlier welcomed Meriam and her family at Rome's Ciampino airport, calling it ``a day of celebration.''
Meriam Ibrahim was sentenced to death over charges of apostasy, since her father was a Muslim.  She married her husband, a Christian, in a church ceremony in 2011. She was told if she accepted Islam she would be freed, but she told the court she would never apostatize from her Christian faith. Her death sentence was overturned in June, but she was then stopped at the airport and blocked from leaving the country by Sudanese officials who questioned the validity of her travel documents. Fr. Lombardi said Pope Francis met with Meriam’s family to show” his closeness, concern and prayers” for all those who suffer for their faith, and especially for Christians who suffer persecution or restrictions on their religious freedom. Meriam and her family will settle in the United States. Shared from Radio Vaticana