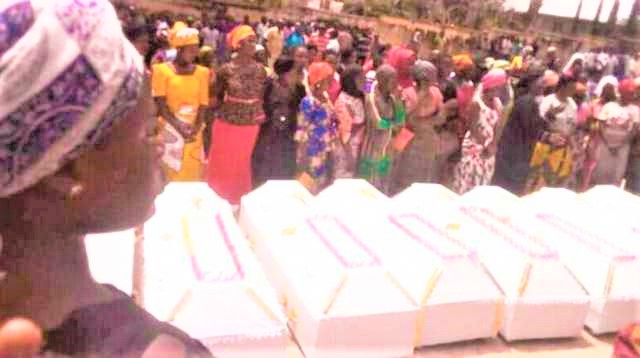 Christian Post reports that 17 Christians, including children, were killed in Nigeria by Fulani militants after a baby dedication service in the state of Nasarawa.

Morning Star News reported that the attack happened on Palm Sunday as Christians in the mainly Christian community gathered for a meal after the child was dedicated that morning at Ruhaniya Baptist Church in the village.

Fulani militants, opened fire, killing 17 people including children. The militants took the life of the baby’s mother, Safaratu John Kabiru Ali, along with many others, some of whom were children as young as 10. The baby’s father, John Kabiru Ali, is currently in critical condition suffering from gunshot wounds.

A resident explained to Morning Star News that among those killed were “10 members of the Ruhaniya Baptist Church, five members of Evangelical Reformed Church of Christ, one member of the Evangelical Church Winning All, and a musician playing for guests.”


“They just started shooting sporadically on a community that was just having a feast of the dedication of a child after a church service earlier in the day on Sunday (April 14) at a Baptist church in the area,” Samuel Meshi, chairman of the Akwanga Local Government Council, said.

“The killings occurred in the evening of that day. Unfortunately, these persons were killed in cold blood for just no reason,” he noted.

Nigerian outlet The Punch notes that the governor of Narasawa State, Umaru Tanko Al-Makura, has demanded that the perpetrators be apprehended immediately.

“This is something we are going to take seriously. We are going to have a Security Council meeting and I have already directed security operatives to ensure that they fish out these people and bring them to book,” Al-Makura said, according to Channels TV.


Nigeria ranks as the 12th worst country in the world when it comes to Christian persecution, according to Open Doors USA’s 2019 World Watch List.

The Fulani herdsmen are an ethnic group of over 20 million in West and Central Africa. Herders have been known to travel hundreds of miles while carrying weapons to protect their livestock.
Edited from Christian Post

Unknown said…
Like other defenceless minority Christian communities, the satanic enemy sets out to devastate both buildings of worship and their congregations. It's beyond comprehension why anyone can take delight in slaughtering innocence people and even more perplexing as to why children are targeted. My wife and I feel so helpless as words of sympathy and well-intended prayers seem so pitiful and inadequate. May God be with you always but especially during your present grieving.
April 28, 2019 at 8:34 PM