#BreakingNews 37,000 to Become Catholic at Easter Vigil Mass in the USA 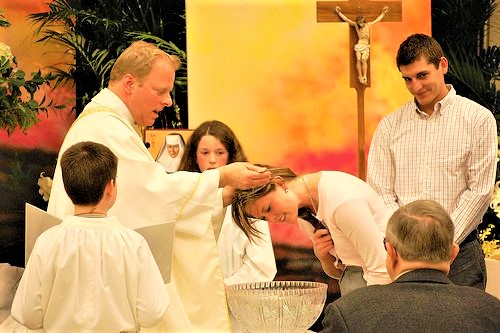 Praise the Lord. America must return to the Lord otherwise they will be lost to the wolves of the darkness...you know which.

U are warmly welcome

Praised be Jesus Christ! Now and Forever! Now, perhaps you can report on how this compares to years past? Are we gaining or losing?

Come to the House of the Father, the Bride of His Son, and the Love of the Holy Spirit!

AAccording to this article,over 30,000 people became Catholics at the Eadter vigil mass 2018

Wow! hope more young men and women will be clergymen and sisters. I pray for those who are thinking.

Prayers for all those to become to the only church that JesuJESUCR left to us! THE CATHOLIC CHURCH welcomes you

Welcome to the family!

Wowwww, God be praised. Thank you Jesus for the gift of the Catholic Church.

So emotional reading this. I love hearing stories of converts. They inspire me to be a better Catholic. God bless

Wow that is great thank God for everything

The great decision... God Bless Us All.

I am blessed being a member of the ONE, HOLY, CATHOLIC and APOSTOLIC Church. Welcome home my brothers and sisters 🙏❤

May God through the intercession of Mama Mary gather us all under the one universal church, the Holy Catholic and Apostolic Church 🙏

What is this stupid so called priest think he is doing, he is so deceived into thinking that he is baptising these people when the scriptures teach that it must be full immersion in water the Greek word baptizo does not mean sprinkle or pour it only means full immersion the gospels attest to this John 3 : 23, Matthew 3 : 16, Acts 8 : 36-39. The blind and those that follow the blind both will fall into the ditch.

You are most welcome to the One, Holy, Catholic and Apostolic Church.... May God, the Father, God,the Son and God,the Holy Spirit bless you.

Enjoy your brand new soul! How awesome to be united with the Mystical Body of Christ,his Holy Roman Catholic Church! It's a lifetime of learning, so never stop and never waiver from attending Holy Mass and receiving the precious Body and Blood of our Divine Savior. Happy Easter everyone !

He is risen.!!! Thank you Lord for an increase in the number of your soldiers. Welcome home my fellow Catholics and may Easter always reside in your hearts.

To the beloved of God that called this occasion stupidity, I pray that the ever most merciful Almighty enlightens you. May the Spirit of God enable you to overcome this deep seated anger and frustration at the things of God. You too will be welcome into the fold when ready

We had full immersion in our Catholic Church on this Easter.

My heart jumped for joy after ready this news.

Praise to the Lord. Many people to be a catholic church, because of that, Jesus Christ growt into heart of them.

Praises be to Lord JESUS. I pray for more to become Catholics in near future.

Welcome brothers and sisters in Christ.

So it is ok to Baptize thousands into the Catholic church on Holy Saturday and also administer the sacraments of Eucharist and Confirmation. How is that possible when the churches are closed and we are not allowed to go to Mass.