The death toll has risen to 290 people killed with the number of injured at 500 people from the multiple suicide bomb attacks in Sri Lanka, Asia. Many children were among the dead; including those youth pictured above who had recently received their First Communion. Some 24 people were arrested in Sri Lanka in connection with the Easter attack. Tuesday, April 23 has been declared a national day of mourning. The dead include 35 foreigners. A Danish billionaire, Anders Holch Povlsen, lost 3 of his 4 children while visiting Sri Lanka. At least 35 foreigners are among the dead, from Poland, Denmark, China, Japan, Pakistan, the United States, India, Morocco, UK and Bangladesh. At least four US citizens have been killed. 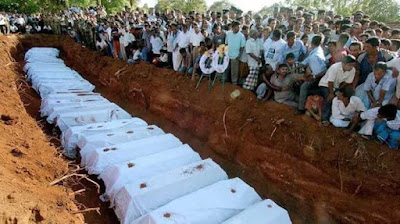 On Easter Sunday, April 21, 2019, the attacks occurred in three Christian churches as well as three major hotels in Colombo.  During Holy Week the head of the Methodist Church was taken hostage along with some other Christians; later they were freed.

The Catholic Churches of Asia expressed condolences to the Sri Lanka Church:
“Allow me to express my sincere anguish at this tragedy that has taken the toll on scores of innocent human lives on the very day when we celebrate world over the victory of life and goodness over death and evil,” wrote the President of the Federation of Asian Bishops’ Conferences (FABC), Cardinal Charles Bo of Myanmar in a letter to Catholic Cardinal Ranjith.

According to investigators, the attacks were carried by suicide bombers. The victims also include a woman and two little girls found in a Dematagoda apartment where a bomb exploded.  The authorities have confirmed that
Pope Francis offered prayers and condolences during his Urbi et Orbi blessing, in St Peter's Square.

In a statement, the Muslim President of the All Ceylon Jamiyyathul Ulama (ACJU), Mufti M. I. M. Rizwe, said, “this is a shameful and heinous act which no human being can tolerate for any reason. Though the attacks were carried out on a day holy to a particular religious community, it is a very sad day for all Sri Lankans.”

A government minister described the coordinated bombings as a "brand new type of terrorism," after a decade of relative calm in Sri Lanka.

Late Sunday, authorities disposed of a six-foot pipe bomb near Bandarayanake International Airport in Colombo. On Easter Monday, Sri Lankan authorities found 87 detonators at a private terminal of the Central Bus Stand-in Colombo.
A 5th grader named Kieran Shafritz de Zoysa, from a private school in Washington, DC, was identified as one of the victims killed in Sunday's Sri Lanka bombings.

The Federal Bureau of Investigation is helping Sri Lanka’s authorities as they investigate.

A US official with the US initial intelligence assessment said the group responsible for the attacks was likely to have been inspired by ISIS.

Here is the full statement:

“President Donald J. Trump called Sri Lankan Prime Minister Ranil Wickremesinghe this morning to express condolences to the people of Sri Lanka for the Easter day terrorist attacks that killed nearly 300 and wounded hundreds of others. The near simultaneous attacks on Sri Lankan churches and hotels constitute one of the deadliest terrorist events since the September 11, 2001 attacks on the United States. Prime Minister Wickremesinghe expressed appreciation for the President’s concern and updated him on the progress of the investigation into the attacks. President Trump pledged United States support to Sri Lanka in bringing the perpetrators to justice, and the leaders re-affirmed their commitment to the fight against global terrorism.”
***********
In Sri Lanka, over 70% of its some 20 million population is Buddhist, with Hindus and Muslims forming the largest minority groups with 12.6% and 9.7% respectively. Christians who number about 1.5 million, are mostly Catholic, forming 7% of the population.
Edited from CNN and Asia News IT
Posted by Jesus Caritas Est at 2:28 PM