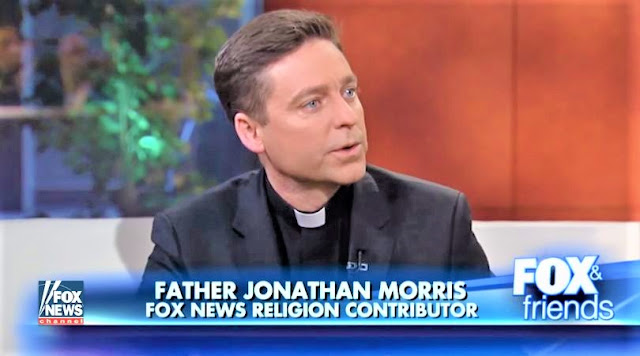 Fr. Jonathan Morris, is a 46 year old priest and former Legionary of Christ member. He recently sent a letter to Crux News explaining his decision to leave the clerical state.
He is currently serving in the Archdiocese of New York. He was a commentator on religious matters in the media, notably for Fox News since 2005.  Morris was ordained in 2002.
Morris was born in Cleveland, Ohio, and is the third of seven children. He studied business administration at Franciscan University in Steubenville, Ohio. He also studied in Rome, Italy, and obtained a graduate Licentiate degree in moral theology from Regina Apostolorum Pontifical University. Morris left the religious order of the Legion of Christ in 2009 and became a diocesan priest of the Archdiocese of New York. He was also Program Director of The Catholic Channel on SiriusXM radio. In February 2015 Fr. Jonathan become pastor of Our Lady of Mt. Carmel Church in the Bronx. Morris begins his letter saying:

"After taking some months of sabbatical to be with family and to dedicate more time to prayer and retreat, I have decided to ask the Holy Father, Pope Francis, to release me from the duties and responsibilities of the clerical state (priestly vows). Taking this step is something I have considered often and at length in years past and discussed with my spiritual guides. While I have loved and thrived in so many aspects of my ministry, deep in my interior I have struggled for years with my vocation and with the commitments that the Catholic priesthood demands, especially not being able to marry and have a family."
He concludes with:
"I hope you are able to hear in my written word the newfound joy I have in my heart as I begin this new chapter, despite my fear of stepping into the unknown. I am grateful to God, my family, and to all of you for so much love, support, and understanding. Some will not understand; I’m okay with that too. Please pray for me."
Posted by Jesus Caritas Est at 9:36 PM

The headline reads that Morris wants the Pope to leave the priesthood. It needs rewriting.

May God be with you in your decision making, this kind of decision does not come easy but only you can make this important step in your life, we are called in many ways to serve the Lord as a lay person or whatever direction the Lord takes. I pray for you,God be with you. Thank you that Priesthood was a wonderful way you served the Lord. I live in Sydney, Australia and have been following you on facebook.
May the Lord pour out His abundant blessings upon you
God Bless you
Rose

it took a lot of courage and prayer for former fATHER JONATHAN MORRIS TO GIVE UP HIS ROLE AS
A CATHOLIC PRIEST. WE WISH HIM EVERY GOOD LUCK AS HE MOVES FORWARD IN A NEW PATH IN LIFE.
GOD BLESS

The Lord moves in mysterious ways...as always you are i God's hands.