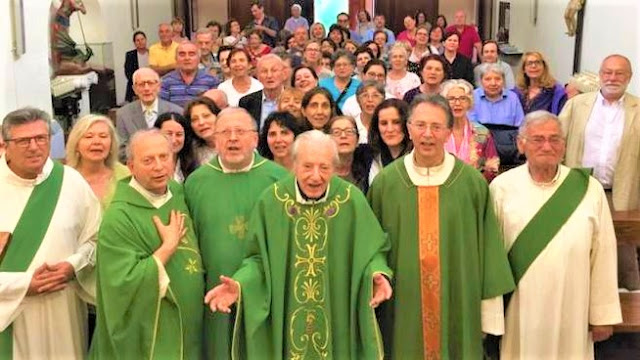 Don Probo Vaccarini was ordained priest at the age of 69 after the death of his wife. He and his wife had 7 children and his four sons all became priests too.
The  Catholic priest, Don Probo Vaccarini, celebrated his 100th birthday on Tuesday, May 28, 2019 in Rimini, Italy. As a widower and with the encouragement of his family he earned a second degree in theology and received at the age of 69 ordination to the priesthood. Since then he has worked as a pastor, in San Martino in Venti, a small rural community near the Adriatic Sea. The online portal "Newsrimini" (Sunday) reported that he celebrated a solemn Mass with Bishop Francesco Lambiasi in the Cathedral of Rimini.

Born on June 4, 1919, Vaccarini had initially taken the profession of surveyor after his participation in the Russian campaign in the Second World War. From his marriage with his wife Anna Maria three daughters and four sons were born; all the male sons also entered the priesthood.
Following the death of his wife, Vaccarini, the devotee of the Italian popular saint, Padre Pio, became increasingly involved in the Church. Encouraged by his sons, he was ordained a priest himself in May 1988.
********************************

DONATE Now to Catholic News World, a Mission, which brings the Gospel to over 200 Countries World Wide! Easy Just Click the LINK below!
If you do not support Christian media who will?
Every little bit helps - as a Donor you and your Family will be added to our Church Prayers - You can add your prayer intention on the Donation site "Donor Wall":
https://donorbox.org/support-catholic-news-world-we-need-
Posted by Jesus Caritas Est at 1:10 PM

What a beautiful story!!!

Glory to the LORD

Church in Her wisdom!
Blessed be the name of God!

Glory to God in the highest

May the Good Lord Bless Rev. Father more abundantly with energy and strength to live longer than expected. amen.

Wow amazing truly blessed 🙏🙏🙏 God bless to all of them

Wonderful is our Lord God

A beautiful story, beautiful and blessed family. May you be showered with even more. Happy birthday, Padre. Congratulations on reaching your century.

Blessed be the Glory.. Almighty continue showering blessings unto you Padre 🙏🙏

GOD BLESS THE PRIEST WITH MORE BOUNTIFUL YEARS FULL OF GOOD HEALTH. HE A CHAMPION OF OUR LORD JESUS CHRIST AND A MENTOR TO MANY. GOD KEEP U SAFE FR.VACCARINI

What a tremendous gift this dear family is. Reading this story fills me with joy. If only others who lose their spouses would consider a vocation to the religious life! We need to We need to pray for this in every diocese. Thank you for this article.

Wonderful story of love! May his youthful energy strength him now that he is 100 years old.

Then y refuse single mothers to be nuns?

With God all things are really possible. Praise be to God.

God is great and always works wonders. God bless our papa priest's generous heart. He raised his kids well. We pray for longer life for him as an instrument in God's hands. Love you and your mission. Rose Amadi

Enter your comment... After many years! God is really great!

Enter your comment... After many years! God is really great!

Our God is the God of vocation.