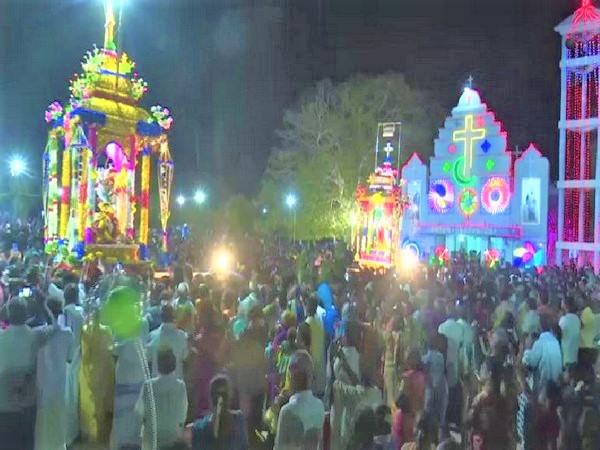 A multi-faith crowd of 100,000 gather in Tamil Nadu for the procession of Saint James
St James is the first Catholic church on Rameswaram Island. The spread of Christianity on the island is the work of the Servant of God Antonio Criminali, the second martyr of India. Its façade has a cross as well as Hindu and Islamic symbols, to show that the believers of all religions are welcome.


New Delhi (AsiaNews/Agencies) – More than 100,000 people from different religious communities took part on Wednesday in the annual procession in the square in front of the small but highly decked out St James Catholic Church in Thangachimadam, Rameswaram (Pamban) Island, Tamil Nadu.

"Although it is a Christian holiday, people of other religions participate. It is only thanks to faith that devotees throng the festival,” said Ravichandrramavanni, president of the local Christian union.

The event attracts thousands of people every year, who come to the small island in the Gulf of Mannar for this and other religious celebrations. This event lasts ten days and the church knows that many other faithful will come. According to the president, "people crowd the church filled with faith in the power of healing through prayer".

The festival began with an overnight Mass, amid the lights of the decorations that illuminated the chariots and the church façade. The procession is called the ‘Chariot festival’ as three chariots carry three statues: The Virgin Mary, Jesus and Saint James on horseback.

The church, which is located in Ramanathapuram, a district that is part of the Diocese of Sivagangai, is the first Catholic place of worship on the island, which also has Hindu temples and Muslim mosques.

The church dates back to 1644 but Christianity arrived on the island with Italian Jesuit Antonio Criminali, Servant of God and second martyr of India, who began to proclaim the Gospel under a hut in 1546.

He was killed three years later by fishermen angry at Portuguese soldiers, but his sacrifice allowed his flock to escape by sea to safety.

Locally, the church is known as St James Santhiyagappar or Santhiya Rayapper Kovil. The original building was destroyed in 1933 and rebuilt seven years later in the same place.

The site draws Hindus and Muslims as well. Its façade has a Christian Cross, an Islamic crescent and a Hindu tower, meaning that in this place all faiths and faithful are respected.
FULL TEXT Source: Asia News IT
Posted by Jesus Caritas Est at 10:08 AM