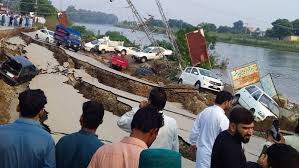 AsiaNewsIT reports that the Toll from earthquake in Pakistani Kashmir has worsened. First responders deployed
The 5.8 magnitude quake caused 25 confirmed victims and over 400 wounded, many of them in serious condition.  Streets and buildings collapsed.  A father recounts: "It all came down.  The children cried, the old people prayed".

Islamabad (AsiaNews / Agencies) - At least 25 victims and 400 people injured, most of them in critical condition: This is the updated toll from a powerful earthquake that hit northern Pakistan, on the border with India yesterday.  The authorities report that telephone lines are currently suspended in rural areas due to a lack of electricity.  Meanwhile Lieutenant General Mohammad Afzal, head of the Authority for the management of natural disasters (Ndma), said that the rescue operations are at work and the situation is under control.

The magnitude 5.8 earthquake (previously referred to as 6.3) was located at a depth of 10 km in the Mirpur district, in the Pakistan-controlled area of ​​Kashmir.  The quake caused extensive damage both in the province of Azad Jammu and Kashmir and in that of Punjab.  Mohammad Tayyab, commissioner of the Mirpur division, reports that hundreds of buildings have collapsed and numerous streets have crumbled, swallowing cars and motorcycles.

Waheed Hameed Butt, 40, resident of Mirpur's F-1 sector and father of three children, says: “I was at home, when everything started shaking.  The ceiling started to crack and objects fell off the shelves.  We went outside and realized that the whole neighborhood was the same.  The children cried and the elders recited the kalima [the Islamic creed, ed.] ".

At the moment, about 150 wounded are admitted to the Divisional Headquarters Hospital in the affected city, while others were transported to the health facilities of Mangla and Rawalpindi, near the capital Islamabad.  Gen. Afzal reports that 200 tents, 800 blankets, 200 field kitchens and 100 first aid kits were distributed in the areas affected by the earthquake.  The Punjab health department sent 20 ambulances of volunteers, medical teams, six vehicles for the recovery of wounded and victims and 100 people specialized in rescue operations.
Full Text Source: AsiaNewsIT - Image source: Google Images
Posted by Jesus Caritas Est at 9:23 AM