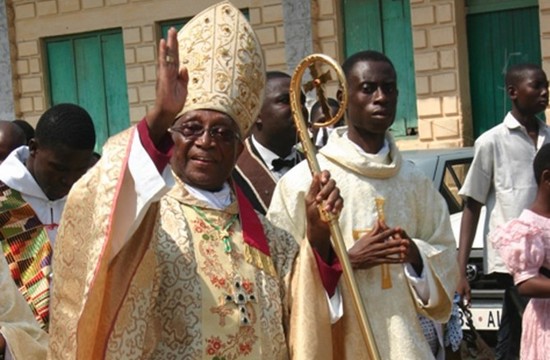 Full Text Letter from the Bishops' Conference of Togo, Africa -
MESSAGE FROM THE CONFERENCE OF THE BISHOPS OF TOGO, TO THE FAITHFUL AND TO ALL PEOPLE OF GOOD WILL
CET March 2, 2020
“Master, we are perishing; do you mind? "(Mark 4.38)


Dear sons and daughters of Togo,
And all of you, men and women of good will.
In the middle of the storm, while the boat in which He was with his disciples, was violently tossed by the raging waves, Jesus seemed to be sleeping on pillows in the back, says Saint Mark the Evangelist. Astonished by this attitude of the Lord, his disciples awaken him by crying, ““ Master, we are perishing; do you mind? ".
We're perishing, don't you mind?

It is the cry of distress that thousands of our fellow citizens utter in front of the apparent silence of the Bishops who seem to be indifferent to the dramatic and stormy situation that our country is going through and to the arrests that spring from the bruised hearts of its children.

Indeed, since the proclamation, by the CENI, of the provisional results of the presidential election of February 22, 2020, great tension has arisen among the population. In this climate of unease and confusion, caused in particular by the lack of confidence of the populations in the organization of the poll and the provisional results proclaimed, a standoff was engaged between the two camps which claim the victory. This was to be expected.

Before the election, the Bishops' Conference of Togo recommended "to the citizens who will make the decision to go to vote, to use this right in peace and respect ..." It also urged “all the institutions involved in this process to assume their role in transparency, justice, truth and respect for the mission assigned to them so that it is not interspersed with fraud or fraud. no violence ”. Likewise, it had expressed it's surprise and indignation at the refusal opposed by the Ministry of Territorial Administration to the request for accreditation presented by the Episcopal Justice and Peace Council; refusal which, in the eyes of the Bishops, was motivated by entirely questionable reasons.

The Bishops recall that the presence of observers from civil society, alongside the institutional organizers, was likely to create voters' confidence in the credibility and sincerity of the results of their vote.


Considering what has happened on the ground, we can say that the presidential election of February 22, 2020, as a whole, took place in a relatively calm climate. But as far as the transparency and fairness of the ballot are concerned, the same cannot be said, hands on conscience. It is in this very regrettable context that the Conference of Bishops of Togo addresses this message to the faithful and to all people of good will.

In order to resolve the crisis that has taken hold in the country and restore confidence, the Conference of Bishops urges the various protagonists and the bodies of the electoral process to work peacefully to restore the truth at the polls.

Since the proclamation of the provisional results, the Conference of Bishops of Togo has not remained inactive in the face of the situation of Monsignor Philippe Fanoko KPODZRO. It has not abandoned the bishop, their older brother, to his "sad fate", as some faithful mistakenly think. In discretion, the Conference was rather in concert, in particular with the Apostolic Nunciature, to find the most appropriate solution.

Contrary to what certain messages published on social networks claim, the Bishops have received neither cars, nor any other present, from anyone, in order to truncate their freedom of appreciation and their freedom of expression .

Furthermore, the Conference of Bishops, as an institution of the Church, could not call for the march on Friday, February 28. It did not want to expose the demonstrators to the possible risk of repression. However, this position of principle does not in any way constitute a disavowal of the courageous step of Mgr KPODZRO, in favor of a cause that his heart of Pastor considers just.

The Conference of Bishops denounces the blockage imposed on the residence of Monsignor KPODZRO, especially since this measure is not only a serious violation of his freedom of movement, but also prevents the functioning of the health center adjoining this place.

The Bishops deplore the fact that priests were prevented from celebrating the Eucharist in the chapel of the health center for nuns, service personnel and the sick.

The Bishops saw with dismay the violence that was perpetrated inside Saint Joseph's College on Friday, February 28, the place where those dispersed by the Security Forces took refuge. It again condemns, with a feeling of deep indignation, these abusive intrusions into the private and sacred spaces of the Church, and calls for the release of all those who have been arrested under these conditions.

Finally, the Conference of Bishops invites each son and daughter of our Country, especially the Catholic faithful, to pray and to work for peace in truth and justice. It exhorts them to avoid all provocation and all violence, by keeping the faith in God which will certainly help us to get out of this storm which shakes our country.

1st Sunday of Lent, Year A.