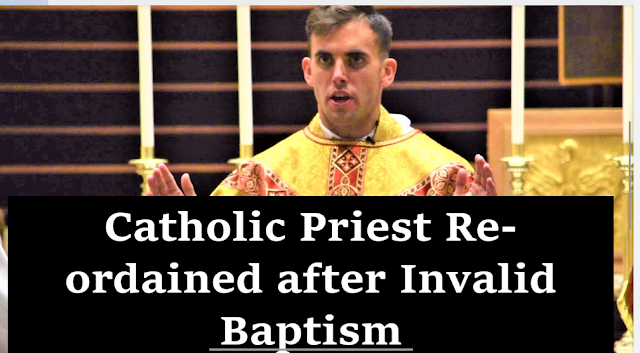 FULL TEXT Press Release from the Diocese of Oklahoma:

The congregation pointed to the Second Vatican Council, which established that no one “even if he be a priest, may add, remove or change anything in the liturgy on his own authority.”

In learning about the congregation’s decision, Father Zachary Boazman, a recently ordained priest for the Archdiocese of Oklahoma City, reviewed a family recording of his infant baptism in 1992 in the Diocese of Fort Worth and realized the wrong word had been used by the deacon, changing the words (formula) of baptism to “We baptize” as opposed to “I baptize.”

According to sacramental theology and the Catechism of the Catholic Church, only a baptized Catholic can validly receive the other sacraments, since baptism is the means by which a person enters the Church and is incorporated into the body of Christ. It also means he had not been validly ordained as a priest.

Because Father Boazman’s own baptism was invalid, the Masses he celebrated, the confessions he heard and the weddings he witnessed prior to being baptized and “re-ordained” also were invalid. This past week, Archbishop Coakley sanated (validated) the marriages celebrated by Father Boazman in the Archdiocese of Oklahoma City. Father Boazman had not celebrated the Sacrament of Confirmation. Baptisms he performed were not affected, since anyone can baptize as long as they use the required wording with the proper intention.

“This has been a heart-breaking experience for Father Zak, but one that he handled with grace and patience,” Archbishop Coakley said. “I am certain this past week, as unsettling as it was, will further strengthen Father Zak’s resolve to serve God’s people and develop an even deeper appreciation for the gift of the priesthood.”

Here is a video of his 1st Mass celebrated last year:
Posted by Jesus Caritas Est at 1:10 PM