Pope Francis Thanks Security Saying "I hope that your effort, often accomplished with sacrifice and risk, will be animated by a living Christian faith" Full Text 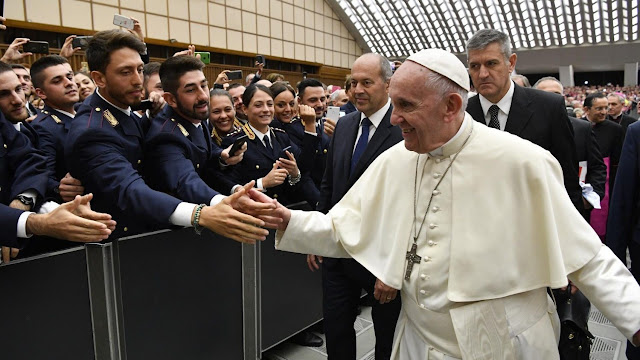 Dear brothers and sisters!
I am pleased to meet the large family of the "Vatican" Inspectorate of Public Security , which commemorates the 75th anniversary of its establishment. I greet you all with affection: Managers, Officers, Agents, with your family members. I address a respectful thought to the Minister of the Interior, whom I thank for his words, as well as to the Chief of Police. And I would also like to thank you because it was nice for me to enter the hall with the nostalgia of the autumn of Buenos Aires [refers to a piece of music played by the Police Band]. Thank you!
In remembering the foundation of this Inspectorate, it is natural to thank the Lord for 75 years of history and for the work of so many men and women of the Italian State Police. In the wake of the deep bond that exists between the Holy See and Italy, they have carried out, with competence and passion, a mission that originates from the Lateran Pacts of 1929. Those agreements, in fact, in sanctioning the birth of the State of the City of Vatican, provided for a peculiar regime for St. Peter's Square, with free access for pilgrims and tourists and under the supervision of the Italian authorities.
Looking back, we see how the origin of the "Vatican" Public Security Inspectorate is placed in a context of precariousness and national emergency, when the political and social forces were engaged in the democratic recovery. In March 1945 the project to give autonomy and juridical configuration to this police service was realized. The Ministry of the Interior, led by the President of the Council of Ministers himself, Ivanoe Bonomi, established the Special Public Security Office “S. Pietro " .
In this way the service that the police forces had been carrying out for some time in St. Peter's Square and in the areas adjacent to the Vatican was strengthened and made more effective. The occupation of Rome by the German troops in 1943 had created many difficulties and worries: the problem had arisen of the respect by the German soldiers of the neutrality and sovereignty of the Vatican City, as well as of the person of the Pope. months, the border between the Italian State and the Vatican City, drawn on the pavement of St. Peter's Square, had been a place of tension and fear. The faithful could not easily access the Basilica to pray, therefore many desisted.
Finally, on June 4, 1944, Rome was liberated, but the war left deep wounds in the consciences, rubble in the streets, poverty and suffering in families. The fruit of war is this. The Romans, and those pilgrims who could reach the capital, flocked more and more to St. Peter's, also to express gratitude to Pope Pius XII , proclaimed " defensor Civitatis ". The new Office of the State Police at the Vatican was thus able to respond adequately to the new needs and to render an important service both to Italy and to the Holy See.
From the day of the establishment of that Office, which gradually took on other denominations up to the current one, a path has unfolded in the sign of fruitful collaboration between Italy and the Holy See, and between the Inspectorate and the Vatican bodies responsible for order public and to the safety of the Pope. Despite the changing national and international scenarios and security needs, the spirit with which the men and women of the Inspectorate have carried out their appreciated work has not changed.
Dear Officials and Agents, thank you so much for your precious service, characterized by diligence, professionalism and spirit of sacrifice. Above all, I admire the patience you exercise in dealing with people of different backgrounds and cultures and - I dare to say - in dealing with priests! My gratitude also extends to your commitment to accompany me on my trips to Rome and on visits to dioceses or communities in Italy. A difficult job, which requires discretion and balance, to ensure that the Pope's itineraries do not lose their specific character of encounter with the People of God. For all this, I am once again grateful to you.
May the "Vatican" Inspectorate of Public Security continue to operate according to its luminous history, knowing how to draw new and abundant fruits from it. I am sure that working in this place constitutes for you a constant reminder of the highest values: to those human and spiritual values ​​which require to be welcomed and witnessed every day. I hope that your effort, often accomplished with sacrifice and risk, will be animated by a living Christian faith: it is the most precious spiritual treasure, which your families have entrusted to you and which you are called to pass on to your children.

May the Lord reward you as only He knows how to do. May your patron Saint Michael the Archangel protect you and the Holy Virgin watch over you and your families. And may my Blessing also accompany you. And please don't forget to pray for me. Thank you.
Posted by Jesus Caritas Est at 11:27 AM