Saint November 14 : St. Lawrence O'Toole of Ireland who Died in 1180 - a Confessor who founded an Austin Nunnery 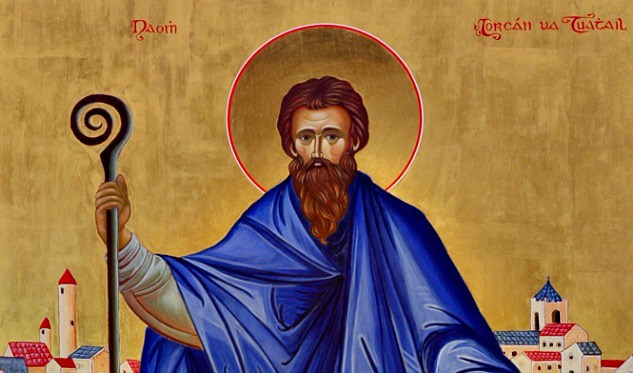 Confessor, born about 1128, in the present County Kildare; died 14 November, 1180, at Eu in Normandy; canonized in 1225 by Honorius III.
His father was chief of Hy Murray, and his mother one of the Clan O'Byrne. At the age of ten he was taken as a hostage by Dermot McMurrogh, King of Leinster. In 1140 the boy obtained permission to enter the monastic school of Glendalough; in that valley-sanctuary he studied for thirteen years, conspicuous for his piety and learning. So great was his reputation in the eyes of the community that on the death of Abbot Dunlaing, early in 1154, he was unanimously called to preside over the Abbey of St. Kevin. Dermot, King of Leinster, married Mor, sister of St. Lawrence, and, though his character has been painted in dark colours by the native annalists, he was a great friend to the Church. He founded an Austin nunnery, of the reform of Aroaise, in Dublin, with two dependent cells at Kilculliheen (County Kilkenny) and at Aghade (County Carlow), in 1151. He also founded an abbey for Cistercian monks at Baltinglass, and an abbey for Austin canons at Ferns.
St. Lawrence, through humility, declined the See of Glendalough in 1160, but on the death of Gregory, Archbishop of Dublin (8 October, 1161), he was chosen to the vacant see, and was consecrated in Christ Church cathedral by Gilla Isu (Gelasius), Primate of Armagh, early in the following year. This appointment of a native-born Irishman and his consecration by the successor of St. Patrick marks the passing of Scandinavian supremacy in the Irish capital, and the emancipation from canonical obedience to Canterbury which had obtained under the Danish bishops of Dublin. St. Lawrence soon set himself to effect numerous reforms, commencing by converting the secular canons of Christ Church cathedral into Aroasian canons (1163). Three years later he subscribed to the foundation charter of All Hallows priory, Dublin (founded by King Dermot), for the same order of Austin canons. Not content with the strictest observance of rules, he wore a hair shirt underneath his episcopal dress, and practised the greatest austerity, retiring for an annual retreat of forty days to St. Kevin's cave, near Glendalough. At the second siege of Dublin (1170) St. Lawrence was active in ministration, and he showed his political foresight by paying due deference to Henry II of England, during that monarch's stay in Dublin. In April, 1178, he entertained the papal legate, Cardinal Vivian, who presided at the Synod of Dublin. He successfully negotiated the Treaty of Windsor, and secured good terms for Roderic, King of Connacht. He attended the Lateran Council in 1179, and returned as legate for Ireland. The holy prelate was not long in Dublin till he deemed it necessary again to visit King Henry II (impelled by a burning charity in the cause of King Roderic), and he crossed to England in September of that year. After three weeks of detention at Abingdon Abbey, St. Lawrence followed the English King to Normandy. Taken ill at the Augustinian Abbey of Eu, he was tended by Abbot Osbert and the canons of St. Victor; before he breathed his last he had the consolation of learning that King Henry had acceded to his request.
SOURCE The Catholic Encyclopedia