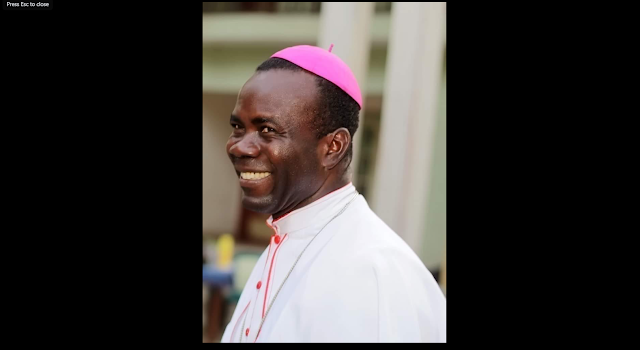 The Roman Catholic Auxiliary Bishop of Owerri Archdiocese, in Nigeria has been released. Auxiliary Bishop Moses Chikwe and his driver Robert Ndubuisi, release was reported by Vatican News.
In a statement of the Archdiocese of Owerri, made available to Vatican News, it was noted that Bishop Chikwe and his driver were released on the evening of the New Year, 1 January.
"With gratitude to God, I hereby inform all Christ's Faithful and People of Goodwill everywhere that at about 10:00 pm on 1 January 2021, His Lordship, Most Rev. Moses Chikwe and Mr Ndubuisi Robert, his driver, who were abducted in the evening of Sunday the 27 December 2020 were finally released. I personally visited and saw Bishop Chikwe in his residence at about 10:45 pm, looking very weak from the traumatic experience. Nevertheless, we continue to thank Almighty God for His goodness to us. At the time of my visit, Mr Ndubuisi Robert, the driver, was unavailable because he had been speedily taken to the hospital for the treatment of a deep cut he received on his hand from the kidnappers," said the Archbishop of Owerri, Anthony Obinna.

After the Angelus prayer on New Year's Day, Pope Francis appealed for Bishop Chikwe and his driver's release. The Pope called upon the faithful, "to join the Archdiocese of Owerri's prayer in Nigeria for Bishop Moses Chikwe and his driver," kidnapped on 27 December. "We ask the Lord that they and all those who are victims of similar acts in Nigeria may return unharmed to freedom and that that dear country may regain security, concord and peace," said the Holy Father.
Archbishop Obinna thanked Pope Francis for the appeal
"I sincerely thank the Holy Father, Pope Francis for mentioning the captivity of Bishop Moses Chikwe and Mr Ndubuisi Robert and praying for their release at his New Year Angelus Message at the Vatican just hours before they regained their freedom," said Archbishop Obinna.

Fake news posts explained the body of Bishop Chikwe had been discovered. The Archdiocese of Owerri released, "This information is unconfirmed, misleading and does not come from the Catholic Archdiocese of Owerri".
Archbishop Obinna also thanked the Imo and Anambra State Governments in Nigeria, together with their security for their efforts to secure the release of Bishop Chikwe and his driver.
"I gratefully acknowledge that the Imo State Government through the Directorate of Security Services and the Anti-Kidnapping Squad of the Nigeria Police Force and the Anambra State Government through the Chief Security Office of the State combined their efforts to attain the release of Bishop Chikwe and Mr Ndubuisi Robert, his driver.
A spokesperson of the State Police Command, Orlando Ikeokwu, said that the Bishop and his driver were released without any ransom paid, thanks to the police's operation in Imo State.