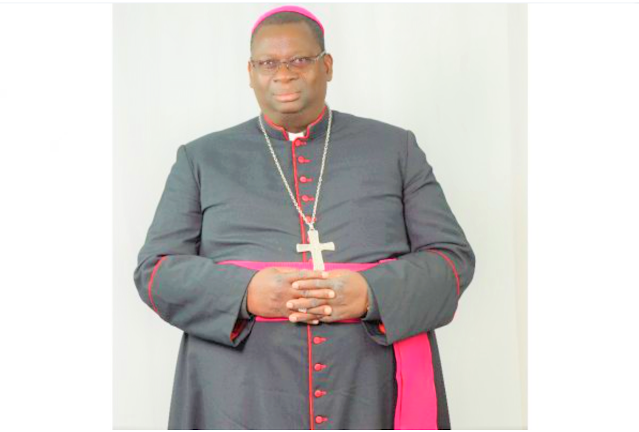 The Lusaka Times reports that Bishop Moses Hamungole, the Bishop of Monze Diocese and Bishop-Director of Communications at the Zambia Conference of Catholic Bishops (ZCCB) has died.
Two weeks ago, Bishop Hamungole announced to his Catholic Faithful that he had tested positive to COVID-19 and was under treatment.
Born on May 1, 1967 in Kafue, he attended Mukasa Minor Seminary.
After his primary and secondary education, he went to to St. Augustine’s Philosophical Seminary in Mpima Kabwe and later to the Theological Seminary of St. Dominic’s in Lusaka.
Since his ordination to priesthood for the Archdiocese of Lusaka on August 6, 1994, he served in several roles.
He also served as Director of Radio Yatsani and served in the Communications Office of the Archdiocese of Lusaka.
Between 2002 and 2008, he had served as Communications Secretary of Association of Member Episcopal Conferences in Eastern Africa (AMECEA).
AMECEA comprises; Eritrea, Ethiopia, Kenya, Malawi, South Sudan, Sudan, Tanzania, Uganda, Djibouti, Zambia and Somalia.
It is a Catholic service organization for the National Episcopal Conferences of the eight countries of Eastern Africa.
Before his appointment as Bishop on February 10, 2014, he was Director of Vatican Radio in charge of English and Swahili programmes from 2010.
1994-1995: Parochial Vicar of the New Kanyama Parish – Lusaka;
1995-1997: Parochial Vicar of the Railway-Chowa Parish – Kabwe;
1997-1999: Director of Radio Yatsani and of the Communications Office of the Archdiocese in Lusaka;
1999-2002: Studies for the Licentiate in Social Communications at the Pontifical Gregorian University in Rome;
2002-2008: Secretary for Communications of AMECEA in Nairobi (Kenya);
2002-2009: President of SIGNIS-Africa;
2008-2010: Studies for a doctorate in Social Communications at the Catholic University of Leuven, Belgium.
Source: lusakatimes.com

Anonymous said…
I am sure that HE will live forever in heaven in perfect health and with full of joy. But, we should pray for the souls who departed this world. Jesus actually listens to our prayers 25/7.
January 14, 2021 at 10:56 AM