Saint April 12 : Saint Julius I : Pope who Convened the Synod at Rome 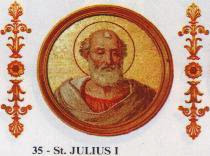