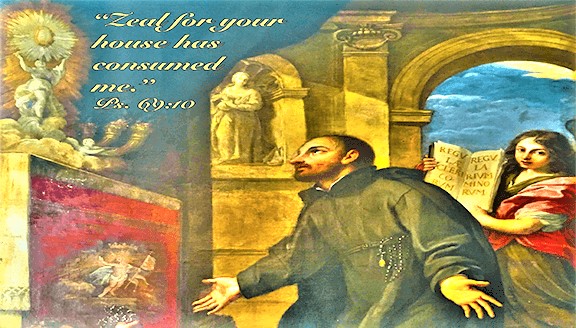 FOUNDER Born:
October 13, 1563, Villa Santa Maria, Province of Chieti, Region of Abruzzo, Kingdom of Naplesa
Died:
June 4, 1608, Agnone, Province of Isernia, Region of Molise, Kingdom of Italy
Canonized:
May 24, 1807, Rome by Pope Pius VII
Major Shrine:
Church of Santa Maria di Monteverginella, Naples
Patron of:
of the city of Naples, Italy and of Italian cooks
St. Francis Caracciolo as a boy was one of those children whom the world "sets down as unnatural." No doubt we ourselves also had we seen the little Ascanio, by which name he was baptized, eschewing games and "the things of a child," to make constant visits to the Blessed Sacrament and give food and other reliefs to the poor, would have thought it all very "odd," did we not reflect that the "supernatural" does strange things at times and manifests itself in old and young alike, regardless of what people may say or even do! Ascanius, or as we must call him by his name in religion, Francis, Caracciolo, was born at Villa Santa Maria in that quarter of Italy known as the Abruzzi, the very name of which always recalls mental pictures of wild and lonely scenery and picturesque groups of Salvator Rosa-esque brigands! The family of the Saint was noble, being a junior branch of the ancient house. While still a youth, he was attacked by one of the several skin complaints collectively described as "leprosy" in those days, but which in the case of the subject of this memoir was made the means of still further withdrawing him from things of earth and towards those of Heaven. He was cured in consequence, it is said, of a vow to devote his life to the service of God, and with this end in view he went, at the age of about twenty-two, to study for the priesthood at Naples. In the intervals of reading, he busied himself with works of devotion and charity, making long visits to the Blessed Sacrament, and consoling the inmates of hospitals and prisons. He had a special liking for neglected churches, seeking to make up by his attendance and prayers for the absence of worshippers in these uncared-for sanctuaries. After his Ordination in 1587, he joined a pious confraternity, known as the "The White Robes of Justice." This Society, like that of the better-known Misericorde, attended condemned criminals and prepared them to die well. All this time, Francis seems to have had in mind the founding of a new religious Order, and next year the matter came to a head. It happened that the same idea had also occurred to another devout man, Giovanni Agostino Adorno, who unburdened his mind on the subject in a letter addressed to another member of the Caracciolo family, named Fabricius Ascanio. The letter was delivered by a very natural error to our Saint, who saw in the occurrence a clear indication of the divine will. Joining in at once with John Adorno and Fabricius Caracciolo, our Saint and they retired for a while to the desert of Camaldoli, where the holy trio drew up the Rule of what was to be the Minor Clerks Regular. Francis then went to Rome to obtain the approval of the Pope for the new Foundation. Sixtus V was at that time in the midst of his strenuous pontificate, clearing the Papal States of the swarms of brigands which had long made that part of Italy one of the most insecure places in Europe, and in beautifying Rome with those stately public buildings which still reflect the glory of the Sistine rule. The Holy Father with quite unwonted alacrity approved the Congregation on 1st July of the same year (1588).

The new Congregation of the Minor Clerks Regular thus established was one of considerable severity. The Clerks bound themselves to distribute various practices of penance among themselves daily, so that while one fasted, another took the discipline, a third wore the hair-shirt and so on. The rest not so engaged were meanwhile watching in turn before the Blessed Sacrament. In addition to the three usual vows, a fourth was added-not to aspire after dignities (de non ambiendis dignitatibus).

At his solemn profession at Naples, 9th April, 1589, Fr. Caracciolo took the name of Francis, from his great devotion to the holy Founder of the Seraphic Order. Fr. Adorno dying two years later, Fr. Francis, entirely against his own wish, was chosen Superior of the Congregation. He showed himself a model in all that related to the Rule, but quite surpassed all his brethren in the matter of prayer and austerity. He meditated several hours daily on the sufferings of Our Lord, and spent most of the night before the Blessed Sacrament. This he did, among other reasons, to make up as far as he could for the coldness and ingratitude of men, and often, too, the culpable negligence of indifferent ecclesiastics which so frequently caused the churches to be practically abandoned day after day. When kneeling before the altar, the face of Fr. Francis appeared to be lighted up with celestial glory, while he ejaculated from time to time a favourite sentence from the Scripture: "the zeal of Thy house hath eaten me up!" (Ps. lxviii. 10.)
The first house of the Clerks was one at Naples, known as St. Mary Major's, which had been made over to them by Sixtus V, but the expansion of the Congregation soon made it imperative to found others elsewhere. Spain early extended its welcome to the newest arrivals in the monastic field, and St. Francis undertook no fewer than three journeys to that most Catholic country under the special protection first of Philip II and afterwards of his son, Philip III. On one of these voyages, the ship that bore the holy Founder and his fortunes was nearly wrecked, but the vessel was saved by the prayer of our Saint. Of course, there was the opposition of the good to be met and overcome, but the spiritual methods and perseverance of Francis were rewarded by the establishment of three branches-the House of the Holy Ghost at Madrid (20th January, 1599), that of Our Lady of the Annunciation at Valla, closed (9th September, 1601), and St. Joseph at Alcala (1601). This last was opened in the University for the purpose of study and the requirements of the usual academic courses, and many of the aspirants to the Order in Spain spent some years there as part of their preparation for Holy Orders. Before this the Clerks obtained in Rome the Church of St. Leonard afterwards exchanged for that of St. Agnes in the Piazza Navona, the famous Church built on the traditional site of the martyrdom of St. Agnes. It was entirely rebuilt in 1642, at the expense of the Pamfili family, and among the many monuments of artistic or historic interest is the tomb of the Princess Mary Talbot Doria-Pamfili, who died 1857. She was the beautiful daughter of the Sixteenth Earl of Shrewsbury, and one of the Maids of Honour to Queen Victoria at her Coronation in 1838.

In spite of the general knowledge as to the "fourth vow" of the Congregation against accepting or even seeking ecclesiastical honours, many desired to see the Founder exalted to what they considered a wider field of usefulness, and Pope Paul V, who greatly admired the heroic virtues and practical wisdom of Francis, wished to make him a bishop, but desisted at the earnest entreaty of the Saint. Besides his work for the Congregation, Francis unceasingly interested himself in the salvation of souls generally. He was much sought after as a confessor while his exhortations brought to repentance numerous public sinners, and he fortified the wavering and the despondent by personal encouragement and the recommendation of the two great Catholic devotions, those to the Blessed Sacrament and to Our Lady. He had the gift of discerning hearts and of prophecy, and his own approaching death was made known to him one day, when, according to custom, he was praying before the altar of the Church of St. Lauretana. He was at that time in negotiation with the Oratorian Fathers with reference to taking over their house at Agnone in the Abruzzi for the use of his Congregation, and he lost no time in going to that place. Arrived there, he was shortly after seized with fever, and having received all the last rites, he died surrounded by the Oratorian Community of the place on the Vigil of Corpus Christi, 4th June, 1608. His body was removed to the Church of St. Mary Major, Naples, where it remained till it was transferred to the Church of Montivergonella which had been made over to the Clerks Regular, 1893, apparently in exchange for the other seized during the occupation of Naples by the French Revolutionary Army.

The Saint was proclaimed patron of the City of Naples in 1838, but the devotion to him which was once so marked a feature of the spiritual life of the place is said now to be much less in evidence. In addition to the Rule which he drew up in conjunction with his two holy coadjutors, St. Francis Caracciolo also left a devotional treatise on the Passion, this work, apart from the inherent value of the subject, is precious as containing the holy reflections and aspirations of one of the outstanding notabilities of the Church in the last period of the Counter-Reformation—the lover of souls—who did so much to heal by his zeal and piety the wounds which heresy and iniquity had inflicted upon the Mystical Body of the Lord.Source : https://archive.org/stream/in.ernet.dli.2015.147060/2015.147060.The-Livies-Of-The-Fathers-Martyrs-And-Other-Principal-Saints-Vol-v_djvu.txt
Posted by Jesus Caritas Est at 11:37 PM