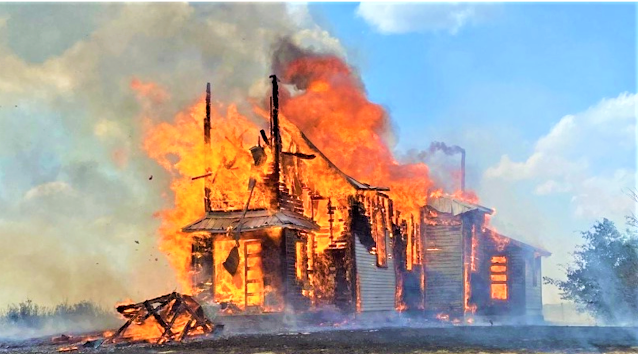 A historic Polish Roman Catholic church in Saskatchewan was burned down on Thursday, July 8, 2021. Bishop Stephen Hero released a statement on the fire(Full Text below).
Some farmers in the area brought water tanks to help put out the fire, but it was too late.
The church was not being used but was a historic landmark where people could enter.
The Holy Trinity Roman Catholic Church for Orolow and District was open from 1909 to 1985.
People in the area spent time and money renovating it about 10 years ago to keep it part of the community.
RCMP said they were not yet able to confirm the cause of the fire or whether it is suspicious.
Over 25 Christian places of worship have been set on fire and vandalized recently in Canada.
Letter from Bishop Hero on the fire:
Roman Catholic Diocese of Prince Albert
OFFICE OF THE BISHOP
Diocise Catholic Romain de Prince Albert
BUREAU DE L'EVEQUE .
July 8,2021 Dear Brothers and Sisters in Christ. I am sad to inform you that the Catholic Church at Orlow, Saskatchewan, burnt down around noon today in the span of about 30 minutes. Holy Trinity Church, although no longer a functioning parish, was a landmark in the Rural Municipality of Redberry, where it stood for over one hundred years and was often known simply as "the Polish Church". The Roman Catholic Diocese of Prince Albert had sold the church building to a local family in2020 who then devoted themselves to the preservation of this beloved place of prayer with its steeple directing eyes and hearts to heaven. In this terrible season of "burning churches," please pray for healing and peace in the communities that are losing their beloved sanctuaries whether by the violent act of an individual or by natural causes. The RCMP are currently conducting a full fire investigation and the cause of the blaze has not yet been determined. May the gentle rain of God's grace put out the fires of anger and blame in our hearts as we seek ways to live in peace as children of the same loving Creator who is good enough to send "rain on the righteous and on the unrighteous" (Matt 5:45). We grieve with those who have lost this loving landmark in Orlow. In the loving Heart of Christ,
Most Rev. Stephen A. Hero Bishop of Prince Albert
Source: https://20d5e337-56d3-432c-a7e2-20c02adb4c45.filesusr.com/ugd/630804_a4105e11ea034f0ca303d259530e7abd.pdf