Pope Francis explains "Every Christian, baptized in water and the Holy Spirit, is called to live as if immersed in a perennial Easter and therefore to live risen." 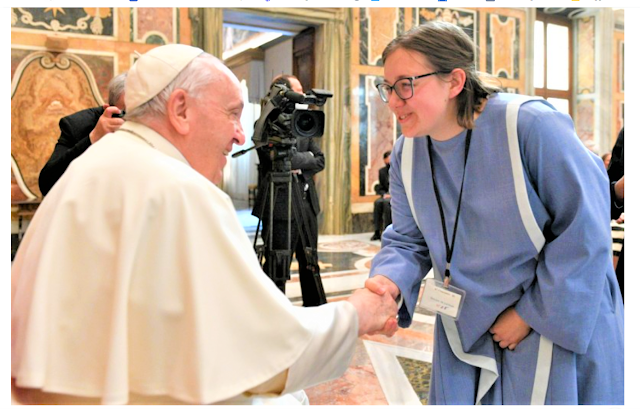 TO THE PARTICIPANTS IN THE YOUTH MISSIONARY CONVENTION,
PROMOTED BY THE "MISSIO" FOUNDATION OF THE ITALIAN EPISCOPAL CONFERENCE

I thank the National Secretary for the words he addressed to me on behalf of all. Thanks!

You came from the different territories of Italy for the  Youth Missionary Conference , on the theme "Back to the COMIGI: The mission starts from the future". It is an appointment organized in collaboration with missionary institutes, which qualifies your formative itinerary, inviting you to renew together your commitment to the universal mission of the Church. This year is also a precious occasion to celebrate the fiftieth anniversary of the birth of the missionary youth movement of the Pontifical Mission Societies, today “Missio Giovani”.

It is an important anniversary for you young missionaries: an opportunity to remember what was placed at the foundation of the birth of this Movement. And from the rereading of its history and in fidelity to it you will find the impetus for a new missionary impulse to be lived day after day. The mission is like this: day after day, it's not once and for all, no, you have to live every day.

This is why I would like to give you three verbs, so easy to remember, which I believe are fundamental for the mission today, especially for young people. I find them in three passages of the New Testament, which see Jesus and the disciples in action. These verbs are: stand  up ,  take care  and  testify . They express three very specific movements, which I hope will support your path for the future.

This word of Jesus still echoes in the hearts of many young people today and he addresses the invitation to each one: "I tell you, get up!" This is a first sense of mission on which I invite you to reflect: Jesus gives us the strength to stand up and asks us to free ourselves from the death of withdrawing into ourselves, from the paralysis of selfishness, laziness, superficiality. These paralysis are all over the place. And they are the ones that block us and make us live a museum faith, not a strong faith, a faith that is more dead than alive. For this reason, to resolve this ugly attitude, Jesus says: “Get up!”. “Get up!”, To be re-launched towards a future of life, full of hope and charity towards the brothers. The mission restarts when we take the Lord Jesus' word seriously: get up  !

Another aspect connected to the first is found in the famous passage from the Good Samaritan (cf.  Lk 10:  25-37) .  Once again the evangelist is Luke. A doctor of the Law asks Jesus: "Who is my neighbor?", And Jesus responds with the parable of the Good Samaritan: a man descends from Jerusalem towards Jericho and along the way is robbed and beaten by brigands, and remains half dead on the Roadside.

Unlike two ministers of worship, who see him but pass by, a Samaritan, that is, a foreigner for the Jews of the time, who did not have much friendship with them, stops and takes care of him. And he also does it in an intelligent way: he gives him first aid as he can, then takes him to an inn and pays the master so that he can be assisted in the following days. He a few brushstrokes to describe another aspect of the mission, that is the second verb:  to take care . That is, to live charity in a dynamic and intelligent way. Today we need people, especially young people, who have eyes to see the needs of the weakest and a big heart that makes them capable of giving themselves totally.

You too are called to put your skills to good use and put your intelligence at the service, to organize charity with far-reaching projects. Today it's your turn, but you are not the first! How many “good Samaritan” missionaries have lived the mission taking care of the wounded brothers and sisters along the way! In their footsteps, with the style and methods suited to our time, now it's up to you to realize a  discreet and effective charity, an imaginative and intelligent charity, not episodic but continuous over time, capable of accompanying people on their journey of healing and of growth. This is the second verb that I give you:  take care  of the brothers. Without selfishness, to serve, to help.

Finally, a third essential aspect of the mission is found in an episode of the Acts of the Apostles, which is well suited to the Easter season we are experiencing. In fact, after his resurrection, for forty days Jesus showed himself to his disciples. He did it to explain to them the mystery of his death, to forgive their escape in the moment of trial, but above all to encourage them to be his witnesses throughout the world. Jesus says thus: "You will receive the strength of the Holy Spirit who will come upon you, and of me you will be witnesses in Jerusalem, in all Judea and Samaria and to the ends of the earth" ( Acts  1,8).

Every Christian, baptized in water and the Holy Spirit, is called to live as if immersed in a perennial Easter and therefore to live risen. Don't live like a dead man, live like a resurrected one! This gift is not only for us, but it is intended to be shared with everyone. The mission cannot fail to be motivated by the enthusiasm of finally being able to share this happiness with others. A beautiful and enriching experience of faith, which also knows how to face the inevitable resistances of life, becomes almost naturally convincing. When someone tells the Gospel with their own life, it breaks through even the hardest of hearts. This is why I entrust to you the last word of the Christian missionary:  testify with your life. And what does not give witness with life, who pretends ... is like someone who has some check in his hand but does not sign. "I'll give you this": it is useless. Witnessing is putting one's signature on one's wealth, one's qualities, one's vocation. Please, boys and girls, sign up, always! Put your heart there.

Do not forget these three verbs:  to get up  from one's sedentary lifestyle, to  take care  of the brothers and  to bear witness  to the Gospel of joy. You have understood? What were the three verbs like? [They answer:  get up ,  take care ,  testify ] Ah, you learned that! Good.