Ukraine Archbishop says of Mariupol "More than a 100,00 civilians still remain in this death trap." 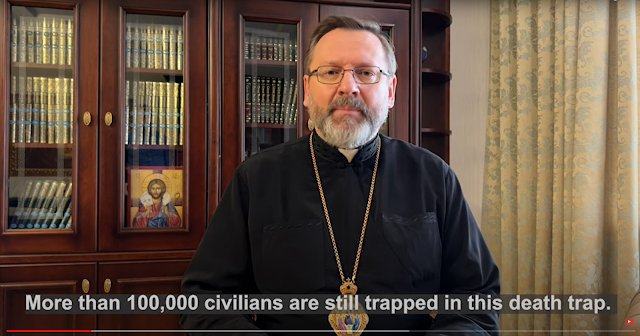 His Beatitude Sviatoslav, Father and Head of the Ukrainian Greek Catholic Church, said this in his daily address on the 56th day of the war.
War is a terrible moment when all secrets become clear. Along with examples of heroism, we have examples of meanness. We have examples of betrayal. We see that even those whom our people considered their elected officials, who were entrusted with power in Ukraine, or even elected as deputies to the Verkhovna Rada, are trading or trading in Ukraine.

The head of the Church compared such traitors to Judas Iscariot, who betrayed Jesus Christ for money.
And Ukraine is our Mother, - the Primate emphasizes, - our people, who are fighting for their right to life, are the ones who cannot be appreciated. He cannot be valued, because human life is priceless in God's eyes.
"We see that invaders sometimes value human life cheaper than a mobile phone or a household kitchen appliance," he said.
His Beatitude Sviatoslav noted that especially these days we pray, mourn and fight for our glorious Mariupol, which heroically opposes the enemy.
"Mariupol, which heroically opposes the enemy and calls on the conscience of Ukraine and the world to help, to open the necessary humanitarian corridors to save lives. More than a hundred thousand civilians still remain in this trap of death. No humanitarian corridors have been opened for several days. And this is the task of all of us: spiritual, civil, diplomatic circles - to save the lives of people in Ukraine, "he said.