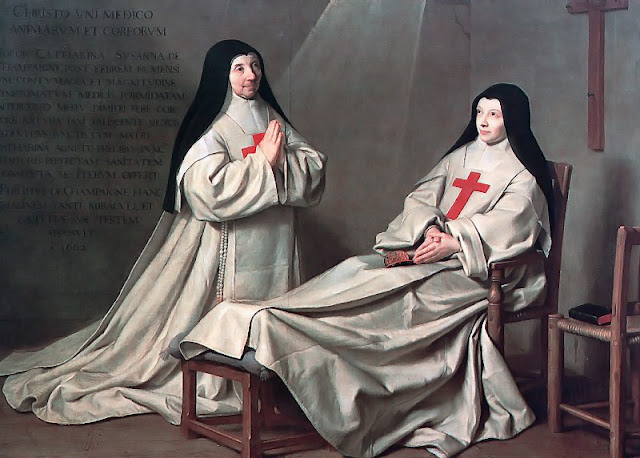 Blessed Catherine of Saint Augustine (Catherine de Longpré, 1632-1668) “Think only of His Service”
Feast Day: May 8
Her Life Catherine of Saint Augustine was born on May 3, 1632, in Saint-Sauveur-le-Vicomte, Normandy, France. She was raised primarily by her maternal grandparents. They made a practice of offering hospitality to the poor and sick, and taught Catherine the virtue of charity. As early as age three, she expressed a strong desire to do God’s will.

She always remembered the lesson of a Jesuit who told her that “it is certain that one does God’s will more in affliction, humiliation, and suffering than when one has everything one wants.” At age five, she had strong mystical prayer experiences where she felt direct contact with God. When she was only eight, she understood that the Holy Spirit was calling her to be a saint, and at age 10 she wrote a note giving herself to “Lady Mary”. Catherine was a witty and attractive and had a naturally cheerful character and a pleasant voice. She was also determined and liked to show off and be noticed. She was attracted by pretty things, but despite her enjoyment of worldly life, when she was 12 she decided to enter the community of Hôtel-Dieu of Bayeux, which was directed by Augustinian nuns, Hospital Sisters of the Mercy of Jesus. She entered their novitiate on October 24, 1646, taking the name in religion of Catherine of St. Augustine. When she was 15, she offered herself for the Canada mission and promised “to live and die in Canada if God would open its door” for her. She made solemn profession as a nun at age 16 on May 4, 1648, in Nantes and set sail for Canada on May 27. The ship arrived in Quebec on August 19. Catherine set about learning the languages of the First Nations people, and looked after the sick. In the spring of 1649, she adopted as her model Saint Jean de Brébeuf, who had just been martyred. Between 1654 and 1668, she filled one after the other the offices of treasurer, director of the hospital, and novice director for her community. Sister Catherine continued to experience deep prayer and at the same time, inner temptations caused her great turmoil. She often had health difficulties. In 1654, she promised to remain in Canada, and, in 1658, she offered herself in a spirit of reparation for the salvation of New France. Therefore, she is considered a co-founder of the Church in Canada. In 1665, she promised to work for “everything that I know to be most perfect and for the greater glory of God.” She fell sick and died on May 8, 1668, at 36 years of age. At the time of her death, she had a reputation as a holy person in both Canada and France. Three years later, Father Paul Rageneau, S.J., published a memoir on her life and her spiritual combats, based on her correspondence and on the journal she wrote at the request of her spiritual directors. She was beatified on April 23, 1989, by Pope (now Saint) John Paul II. Her Spirituality As early as three years of age, Catherine de Longpré showed a precocious inclination to follow the will of God absolutely. This characterizes her entire spiritual journey. A Jesuit helped her understand how accepting suffering as God’s will has a redemptive value for the Church. Her spirituality was marked by her times. She was influenced by the rigour of the Jesuits and Saint John Eudes, who emphasized the demands of divine justice. In this spirit, she offered herself as a voluntary hostage of divine justice for the salvation of the people in New France: “I offered myself to the Divine Majesty to serve him as a victim whenever it pleased him; I took no care for my life or my possessions. I only want God to dispose of them according to his holy will.” Catherine was very sensitive to the evil of sin and felt solidarity with sinners: “I found myself overwhelmed by the intolerable weight of all the crimes I witnessed. … I let it draw me into being helpful to souls.” She prayed for an end to the sale of alcoholic beverages in Quebec, because of the violence it gave rise to among First Nations people. She offered her suffering to Jesus with a prayer it would evoke God’s mercy on the colony. Catherine’s personal prayer conformed to the movement of the liturgical seasons and their great feasts: Easter, the Ascension, the Exaltation of the Holy Cross, All Saints’ Day, Christmas. “On June 12, 1664, the eve of Pentecost,” she wrote, “I saw the Holy Spirit in the form of a heavy cloud which only wanted to empty itself.” She had a particular devotion to Jesus in the Eucharist, the main source of her strength against temptation, and to the Virgin Mary, to Saint Joseph, and to her protector, the Jesuit martyr Jean de Brébeuf. Catherine was extremely discreet about her trials and her intense prayer experiences. She was a decisive woman of action, and, with great tenderness, she spread joy and consolation among the people she looked after. Her writings reveal her common sense, clear judgment, openmindedness, frankness, generosity and detachment. She could be firm and she could look at things objectively. She loved her land of adoption and vowed to die there, should it be God’s will for her to do so. She wanted to remain in Canada to serve the sick and the poor, even if the other nuns returned to France. Saint François de Laval, Quebec’s first Bishop, was well aware of Catherine’s inner life, her trials, and her gifts. When she died, he said, “I don’t need to see any extraordinary signs from her to be convinced of her holiness, because her virtues made me perfectly aware of it.”
Source: CCCB.CA