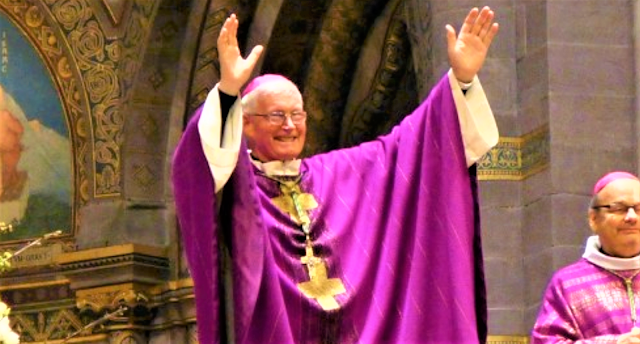 A retired French Archbishop Jean-Pierre Grallet is under investigation for “inappropriate gestures.” The 81-year-old, who released a statement of apology (See Bottom), is also is a member of the Franciscan Order. The OFM (Order Friars Minor) released a statement indicating that they would suspend the retired bishop's management of a house of senior Franciscan brothers.
On September 15th, 1968, Grallet took final vows of the Franciscan Order and he was ordained a priest on June 28th, 1969. Jean-Pierre Grallet was archbishop of Strasbourg from 2007 to 2017.
Statement from the OFM
By a declaration addressed to Mgr Éric de Moulins-Beaufort, president of the Conference of Bishops of France (CEF), Mgr Jean-Pierre Grallet, Franciscan and archbishop-emeritus of Strasbourg, made it known that he is the subject of a canonical procedure and a criminal investigation. He recognizes "inappropriate gestures" towards a young adult woman, at the end of the 80s. He writes to deeply regret this behavior.
As Provincial of the Minor Brothers of France-Belgium, I learned on September 30, 2022 of the existence of a canonical procedure as well as a criminal complaint against Jean-Pierre Grallet. This complaint does not concern abuse of minors, nor does it concern the period when Bishop Grallet exercised his episcopal ministry in Strasbourg. It was brought to my attention in accordance with the protocol established by the Recognition and Reparation Commission (CRR) of the Conference of Religious of France (CORREF).
I immediately contacted the competent authorities – Apostolic Nunciature – to discern what action to take. Indeed, from the point of view of the internal law of the Church, it is not up to a person in charge of a congregation to take canonical measures against a bishop, even a member of this congregation. Since his episcopal ordination, Bishop Grallet has come under the sole Congregation of Bishops in Rome.
On October 27, 2022, I met the officials of the CRR, seized by the victim, in order to take the measures falling under my responsibility without hindering the functioning of the judicial, civil and ecclesial institutions, because the procedures are still in progress.
As Provincial, I am responsible for the missions that I entrust within the framework of the Province. I had entrusted Bro. Jean-Pierre with the responsibility of a house of older brothers. After taking the advice of the Provincial Council, I decided to suspend him from office on November 4, 2022 pending the conclusions of the investigation.
We, Friars Minor, are reeling from the latest revelations in the Church, like all of God's people. The mistakes made and the generalized climate of distrust towards the institution call for great caution and high standards. Despite legitimate anger, let's keep in mind that each case is unique. The case of Mgr Grallet is different from that of Mgr Santier and Mgr Ricard which has been echoed in the press in recent weeks. It will be up to the courts to precisely qualify the facts and their seriousness.
We think first of all of the person who is the victim and of all the people who are victims of abuse, especially in the Church. We must continue to hear their cry for truth and justice. We share the pain of those who are hurt by this revelation. We reaffirm our firm and resolute will to fight against all forms of abuse within our province. We hope that Fr. Jean-Pierre's declaration will contribute to opening a new time for the Church; a Church which recognizes its faults, which undertakes to repair what has been broken and which acts so that these facts do not happen again.
We continue our active collaboration with the CRR and other civil or ecclesial bodies to better protect and recognize victims. We are deepening our work of prevention, improvement and acceleration of our procedures. We continue to invite anyone who feels they are a victim of a Franciscan friar to contact the CRR directly:
by email: victims@crr.contact, by telephone: 09 73 88 25 71, or on the website www.reconnaissancereparation.org .
Fr. Michel Laloux, Provincial of the Franciscans of France and Belgium.
Source: https://franciscains.fr/communique-province-mgr-jean-pierre-grallet/
FULL TEXT Message from Mgr Jean-Pierre Grallet, Archbishop Emeritus of Strasbourg
Posted on November 16, 2022
At the end of the 1980s, when I was a Franciscan religious, I acted inappropriately towards a young adult woman, behavior that I deeply regret.
A canonical investigation is currently underway and a report to civil justice has been made.
During the summer of 2022, I learned of this woman's testimony and I immediately wrote to her to tell her that I had failed and to ask her forgiveness.
I wish, by this public declaration that I submit to the President of the Conference of Bishops of France , to contribute to the process of truth and to assume my responsibility.
From now on, while awaiting the conclusions of the canonical and civil inquiries, I am withdrawing from public speaking.
I got lost and injured someone. The forgiveness that I asked her, I also express to all her relatives, as well as to all those who, today, will be bruised, under the shock of this revelation.
Brother Jean-Pierre Grallet,
Archbishop Emeritus of Strasbourg,
November 15, 2022
Source: https://metz.catholique.fr/actualites/actualites-diocesaines/401247-message-de-mgr-jean-pierre-grallet-archeveque-emerite-de-strasbourg/
Image: https://www.alsace.catholique.fr/actualites/321550-merci-mgr-grallet-10-ans/