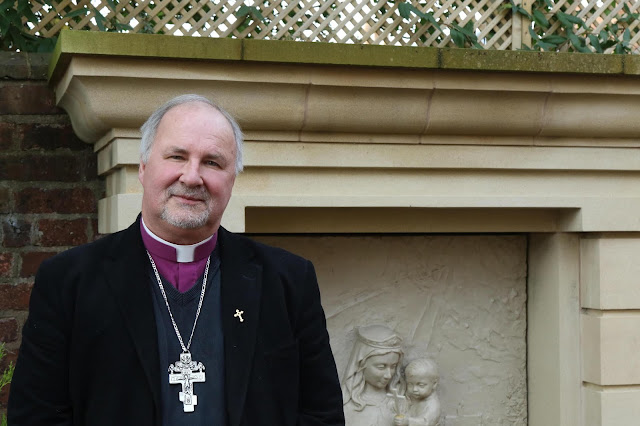 According to the Catholic Herald, Gavin Ashenden resigned his Anglican chaplaincy in 2017.
He left the Church of England that same year to become a bishop in the Christian Episcopal Church, a breakaway group of traditionalist Anglicans.
Writing in a forthcoming edition of the Catholic Herald, Ashenden said the Church of England had capitulated “to the increasingly intense and non-negotiable demands of a secular culture.”

The former chaplain said he was helped in his conversion by taking up the Rosary and by looking into Eucharistic miracles. “The fact that [the miracles] were unknown amongst those who celebrated the Anglican version of the Eucharist, carries obvious implications,” he wrote.
His personal website provides an interesting biography of his life:
Gavin Ashenden lives partly in Shropshire and partly in Normandy.He grew up in S.W. London, and then Kent, and was educated at the King’s School in Canterbury. After originally reading Law at Bristol University, he found himself with a vocation to the priesthood.

He trained at Oak Hill Theological College in London, studying theology. He was ordained by + Mervyn Stockwood in Southwark Cathedral in 1980, and was appointed to a curacy in Bermondsey.

He spent the next ten years as a parish priest; as a curate at St James’, Bermondsey, then a docklands parish along the river Thames by Tower Bridge, and subsequently as a  Vicar of a Church on the edge of South London.

During the 1980’s when he was also vice-chair of Keston College, he was involved in smuggling bibles and medicine into the former Soviet Union, and samizdat out -for publication in the West. The experiences of being occasionally arrested and interrogated by the KGB and other security services played an important part in the development of his views on totalitarianism.

After postgraduate study in the Psychology of Religion with the Jesuits at Heythrop College in the University of London , he then completed a doctorate on the life and work of the Oxford Inkling, Charles Williams, and subsequently published ‘Alchemy and Integration- A study of the Life of writing of Charles Williams. (Kent State University Press).

He spent 23 years at the University of Sussex as a senior lecturer and senior chaplain, lecturing in the Psychology of Religion, Literature, and convening an MA programme in Monotheist Mysticism.

During this period he was also employed freelance by the BBC to present a weekly Faith and Ethics radio programme for four years.  He also become Presenter of the  the international Faith & Ethics podcast.

He has published on the Oxford Inklings and CS Lewis in particular, writing Op Ed pieces for the London Times and  the Daily Tekegraph and occasional articles and book reviews in the Church Times.

He was a member of the General Synod of the Church of England for 20 years, and was appointed one of the  theological canonries  at Chichester Cathedral. He is a member of the Society of the Holy Cross.

In 2008 he was appointed a Chaplain to the Queen (2008-2017).He spent a number of years as a member of the ecumenical priestly fraternity of the Little Brothers of Jesus (Charles de Foucauld)

He has lectured in the USA as a visiting theologian for the Lutheran Church in Oregon, spoken at a variety of Diocesan Conferences in the UK, and represented the Church of England as a delegate to the World Council of Churches.

In 2017 and he resigned from his chaplaincy to the Queen in order to be free to speak out for the faith in the contested public forum, and subsequently appeared on media outlets across the world, including Fox News in the USA and the Bolt Report in Australia.

Convinced that the consecration of women to the episcopate represented the replacement of apostolic and biblical patterns with the competing culture of the values of Cultural Marxism, and dissenting from the increasing accommodation of the Church of England to  radical secular views on gender, he  resigned from  the Church of England in 2017.

On the Feast of St Michael and All Angels 2017, the Archbishop of the Christian Episcopal Church announced that Dr Ashenden had been consecrated as a Missionary bishop to the UK and Europe.

Much of his ministry is found on the Internet. Between 100 and 400 people share in the daily office and the viewing figures of his weekly homilies vary between 200 and a 1,000 viewers.
Source of Biography and Image : https://ashenden.org/

Julie Cook said…
Way to go Gavin!!!
I saw this coming...and it is just one more shove from God, to me, regarding my own journey...
He keeps wondering what else will it take...
I suppose it's getting closer!!
Thank you for allowing your journey to be such a shining example of how to yeild to God's direction!
God Bless you my friend!
Julie
December 17, 2019 at 8:16 PM

Virginia Anne Graham said…
Bless you dearest Gavin, my Brother in Christ. I am happy for you both as you are being led by Father God. Be Blessed in all that you are and do, The God of Israel watches over your coming in and your going out. A Happy Christmas and New Year.
🕊
December 18, 2019 at 8:21 AM

Virginia Anne Graham said…
Bless you dearest Gavin, my Brother in Christ. I am happy for you both as you are being led by Father God. Be Blessed in all that you are and do, The God of Israel watches over your coming in and your going out. A Happy Christmas and New Year.
🕊
December 18, 2019 at 8:26 AM

john william vondra said…
Shall we see our beloved Elizabeth II close behind Gavin..We Pray for the conversion of England and now because of Vatican II the whole English speaking world..just in case, we can make do with French, Italian or any other language..English is all set up...what a shame to waste the opp. with Love
john
December 18, 2019 at 9:52 AM