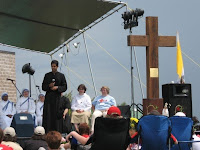 Some helps for discernment for young men:Pray, hope and don’t worry. Ask God what He wants of you (He wants what will make you most happy).Spend time with God in Adoration. Talk to your Mother (Mary). Pray the Rosary. Talk to people (parents, siblings, friends, priests, seminarians) – vocations are not discovered in a vacuum but in community. Read articles on discernment from good Catholic websites/publishers.Read What’s Life All About (4 Levels of Happiness):http://www.lifeprinciples.net/whatslifeabouttext.html
By Seminarian: Nic Carvalho
Posted by Jesus Caritas Est at 5:35 PM