Amazing Testimony of Priest who is Ready to die for flock in Ebola region of Africa - SHARE! 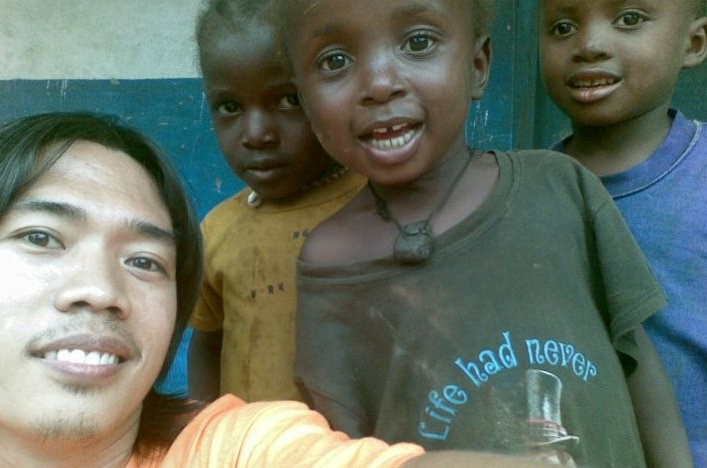 Pinoy priest in Ebola-hit Africa ‘ready to die’ for flock

CBCPNews  report: MAKENI, Sierra Leone, Oct. 30, 2014—True to his calling, a Filipino missionary based in Sierra Leone, one of the countries in Africa plagued by the killer Ebola virus, refuses to return to the safety of the Philippines, stressing that a “good shepherd” never leaves his sheep to the wolves.
“I will stay here in Sierra Leone. I am still convinced that this is not a moment to leave this country,” said Fr. Anthony Patrick S. Santianez on the social media site Facebook on Wednesday, Oct. 29.


Fr. Anthony Patrick S. Santianez, a Filipino priest presently serving in Ebola-hit Sierra Leone, first served in Africa as a brother for three years before returning to the Philippines to be ordained. (Photo from Santianez’ Facebook account)
Ready to die
The Xaverian priest from Calbayog, Samar has left no room for guessing, sending a clear message that he is prepared to die for his mission.
The good shepherd, he explained, “lays down his life for ‘his sheep’ if necessary”.Santianez shared, “The Philippine government asked us Filipinos in Sierra Leone, Liberia, and Guinea if we would like to be repatriated next month … My answer was, is, and will be no.”
Inspired by the New Testament passages in John 10:1-21, he pointed out he tries to be like a “good shepherd” who does not abandon his sheep when the flock is under attack.
In an earlier interview with CBCPNews, Santianez said that while he genuinely fears for his own health, leaving behind his parishioners for the Philippines is not an option, especially when his presence in Makine, the diocese he serves, is most needed.
He told CBCPNews he once considered going back to the Philippines, until a touching petition by one of his “sheep” changed his mind.
Touching plea
“My parishioner told me: Father, don’t leave us. Stay with us, because if you leave us we will get afraid more. This incident made me finally decide to stand by ‘my’ people, my parishioners, and ‘my’ countrymen and women,” he said
According to Santianez, who first came to Sierra Leone in June 24, 2008 after finishing theology at the Ateneo de Manila University (AdMU), this is an opportunity for him to express solidarity with Sierra Leoneans.
“Although my family knew from news reports what’s happening here, it surprised me when, amid all the confusion Ebola occasioned, my mother begged me to stay here. I knew outright it was God’s voice speaking through my mom,” the missionary, who first came to Africa as a brother, added.
As assistant parish priest of St. Guido Maria Conforti Church in Makine, Santianez administers the sacraments, teaches catechism, and makes home and community visitations in his diocese.
Again, his only appeal to Filipinos: “Prayers, please … I am calling all my prayer warriors to pray for all of us. Padayon!” (Raymond A. Sebastián) Shared from CBCPNews