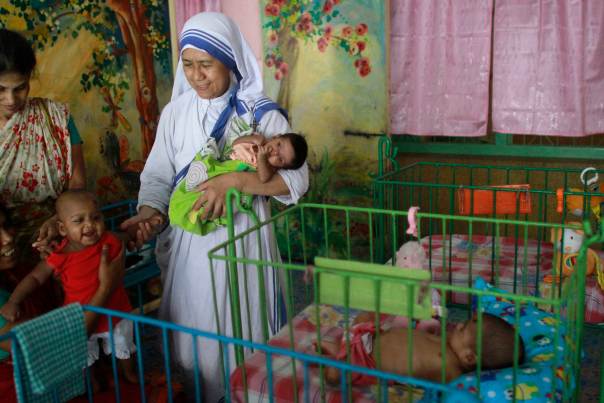 ASIA/INDIA - The government shuts down 16 child care institutions: including the orphanage of the Missionaries of Charity
Ranchi (Agenzia Fides) - The Government of India has cancelled the license of 16 child care institutions including "Nirmal Hriday" run by the Missionaries of Charity of Mother Teresa in Ranchi. The provision follows a report submittted by the Jharkhand State Commission for protection of children's rights, with a recommendation to take action against 31 institutions. As Fides learns, the provision comes as a result of the case of baby selling in "Nirmal Hriday" in July last year. The Prime Minister of Jharkhand, Raghubar Das, had ordered the Commission to present a report on the situation, monitoring 126 homes throughout the state. The 16 child care institutions were closed due to "reported violations of various provisions of the law on juvenile justice", said the Director of the Commission D.K. Saxena.
The "Nirmal Hriday" in Ranchi, run by the nuns of Mother Teresa, is on the list of the 16 closed orphanages. Another 24 institutions have three months to improve conditions. Among the irregularities detected, the lack of complete documentation on children or the lack of basic services such as accommodation, food and safety provisions.
The case of "Nirmal Hriday" came to light in July 2018, when the institute was involved in an alleged baby selling. The case was a shock to the nation and raised questions about the functioning of child centers in the state of Jharkhand. Sister Koshleniea and Anima Indwar, a woman employed in Nirmal Hriday, were arrested on 3 July for their alleged involvement in the illegal trafficking of children. (SD) (FULL TEXT Release from Agenzia Fides, 6/2/2019
)