The Catholic wife and mother of five young children; British journalist and writer Caroline Farrow has been receiving harassment for years. Farrow's children have also been targeted by the activists. Her family has personally been receiving months of harassment from the transgender lobby. Mrs. Farrow's husband is a Roman Catholic diocesan priest(a former Anglican vicar who converted to Catholicism in 2010). She appeared on ITV’s “Good Morning Britain” in September 2018, and used the wrong pronoun for the son of trans activist Susie Green, with whom Farrow was debating. The son was born Jack, a male, and subjected to a procedure on his 16th birthday, and is now prefers to be called Jackie. Farrow,  described the situation as child abuse and the procedure in medical terminology on Twitter. Then the Surrey Police called her with the accusation that her comments were “transphobic.” However, this investigation was dropped and a British Bishop noted: 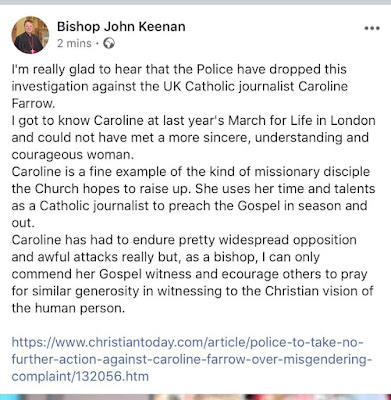 Now, a transgender lawyer is trying to stop the Catholic journalist from sending tweets by seeking an anti-harrassment injunction through the High Court. According to the Telegraph, Stephanie Hayden, a commentator and activist who is legally female, alleges that Caroline Farrow sent her hundreds of tweets over the course of several days. Stephanie Hayden has been convicted when threatening someone with a golf club. It was also threatened that Stephanie would come to Farrow's house with a golf club. However, Farrow herself has been receiving years of harassment. Here is an example of a Tweet by Farrow's accuser: 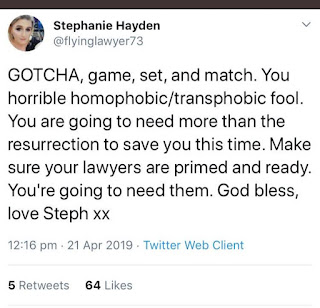 The Telegraph explains: It is claimed by Ms Hayden that she was subjected to unsavoury accusations during the course of the alleged episode on social media. Hayden wrote on Twitter: “Today I served an Order of the High Court with the authority and authorisation of a High Court Judge. I have no further statement to make.” Both women have previously been involved in high-profile rows over transgender identity.
Ms Hayden attempted to visit her the Farrow's and left the papers from Court. Mrs Farrow explained she was "shocked" by the allegations - which she denies - and said she was "alarmed" by the decision of Ms Hayden to visit her in person.

You can support Caroline Farrow and her family by Prayer or by Donation to her GoFundMe Account:
https://ca.gofundme.com/t8nbd2-protecting-caroline-legal-fund-4-brave-lady
Posted by Jesus Caritas Est at 8:09 PM

Glad to see Jsutice is being served to Transphobes. See, we live in a free world where you can say whatever you want! But there are consequences for what you say, especially if it's as bigoted as bullying a child like this "Mother" of five did. Karama!!!!

There is no such thing as a "transphobe.' A "phobia" is an irrational fear of something. No one is afraid of those who are mentally ill and think they are of another gender other than what their body was created to be.

Let's be real clear here: if you have a machine, and the machine is designed to do a certain thing, and instead it starts doing something else, then you don't say the machine is functioning normally. You go to the computer running the machine and find out what's wrong with it.

If your body is designed male, you have male parts, and you have the appropriate number of chromosomes, then you are designed to function as a male. If, however, you start thinking that you are female, this does not mean you are female. It means that the computer between your ears has gone haywire and needs to be fixed.

This is simple science and natural law, not hatred. Get over yourself.