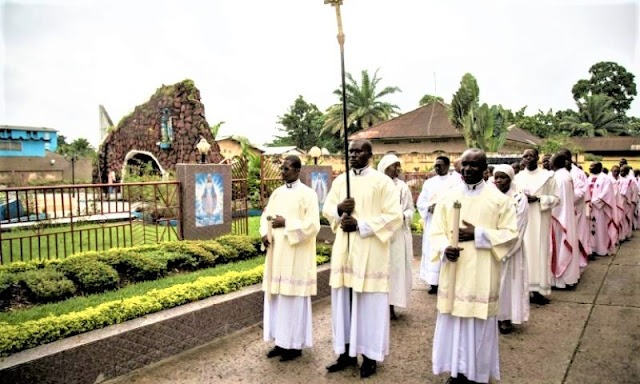 AFRICA/CAMEROON - The two priests of Kumbo, whose Bishop had denounced the violence against civilians, have been released
Yaoundé (Agenzia Fides) - The two priests kidnapped on August 15 in Kumbo, in the department of Bui in the North-West region of Cameroon, have been released.
Fr. Franklin Banadzem Dindzee, assistant of the diocesan youth of Kumbo, and Fr. Patrick Atang, another priest of Kumbo, were released on the evening of Sunday 18 August. The circumstances of their release have not been made known.
The two priests had been kidnapped on August 15, by armed men, perhaps independence fighters, while they were going to Oku to celebrate Mass for the Assumption.
Their abduction had aroused the strong mobilization of the faithful of the diocese of Kumbo who had held prayer meetings to ask for the grace of their release. On August 19 a prayer of thanksgiving was held in the cathedral of Kumbo for the release of the two priests.
The kidnapping of two priests of the diocese of Kumbo took place immediately after the strong stance of the local Bishop, His Exc. Mgr. George Nkuo, who in the homily of the morning mass of the solemnity of the Assumption, stated: "Kumbo has had its part of suffering. We have seen innocent people brutally murdered. Many people have lost their homes and properties. Violence and cruelty have become so common that it is now considered normal to kill, torture, extort and demand ransom. We continue to hear gruesome stories of people kidnapped or arrested, tortured and asked to pay huge sums before being released".
Since 2016 in the north-western and south-western English-speaking regions of Cameroon, separatists are fighting against government forces in an attempt to create a separate state called Ambazonia. More than 2,000 people have been killed and over 400,000 have been forced to leave their homes.
The Catholic Church has asked for justice for the English-speaking Cameroonians, and has denounced the violations of human rights by the security forces; at the same time, it condemned the violence carried out by the separatists. This has led the clergy to be targeted by both sides, and priests are often kidnapped by separatists for extortion purposes. (L.M.) (Agenzia Fides, 22/8/2019)
Posted by Jesus Caritas Est at 3:05 PM