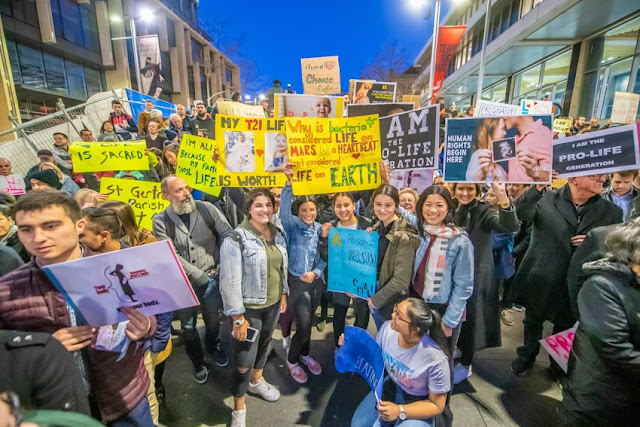 Thousands of people protesting against the legalisation of abortion on demand in NSW filled Martin Place in Sydney’s CBD to overflowing on 20 August, 2019 hours after the NSW Premier recapitulated on the abortion bill.

The protest began as NSW Minister for Finance, Damien Tudehope, gave an impassioned pro life speech in defence of the unborn in the upper house.

The crowd, estimated at 3000-5000 strong according to police and organiser’s estimates to urge them to “maintain the rage,” adding “we cannot allow this bill to pass the parliament. “I urge you all to maintain the level of support for the people you are here on behalf of today,” he said.


“YOU MUST REMAIN SOLID WITH US THROUGHOUT THIS DEBATE IN THE UPPER HOUSE.”

Premier Gladys Berejiklian made the announcement after a fraught cabinet meeting where she faced anger from colleagues concerned at the rushing of the bill through parliament without due process and as a petition urging MPs to reject it reached more than 77,000 signatures.

The decision means the legislation will not be voted on until the next sitting week of Parliament which commences on 17 September. Numerous political, civic and religious leaders addressed the protesters.


Students from Tangara School for Girls  supported the rally.

He thanked the protesters for fasting, praying, and lobbying politicians in recent weeks and encouraged them to continue to stand up “for life and for love”.

“We can convince our leaders to build a civilisation of life and love. We love every human being from the beginning to end and everything in between.”


The temporary reprieve allows greater time for the drafting of amendments to the Reproductive Health Care Reform Bill 2019.

‘Tsunami of opposition’ needed
Government MLA Tanya Davies, who has faced death threats after attempting to secure amendments which would protect babies who survived abortion, and to outlaw sex selection abortions, was one of several politicians to speak.

“Today we’ve had a stay of execution,” she said. “We now have three weeks to garner and galvanise all of our voices in unison calling for the bill to be ditched. Nothing less will satisfy our community of NSW, not just the babies, but the mothers, their families and those professionals who are faced with this every single day.

The Nationals federal member for New England, Barnaby Joyce, told the crowd,
“I’m not here to espouse a religion or to say I’m some saint, I’m here because I’m trying to argue on logic,” he said.


The protest was the largest pro-life rally seen in Sydney in decades, reflecting – in part – anger at the way pro-life MPs say they were blindsided by the introduction of the bill on 1 August.


Dr Catherine Lennon broadcasted the heart beat of the unborn child of Chantal Czeczotko.
The group marched to NSW Parliament House and from there, more than 1000 people remained for a prayer vigil at St Mary’s Cathedral that ended at midnight.
Edited from CatholicWeekly.com.au - Image Source: Google Images - CW - Giovanni Portelli
Posted by Jesus Caritas Est at 12:06 PM