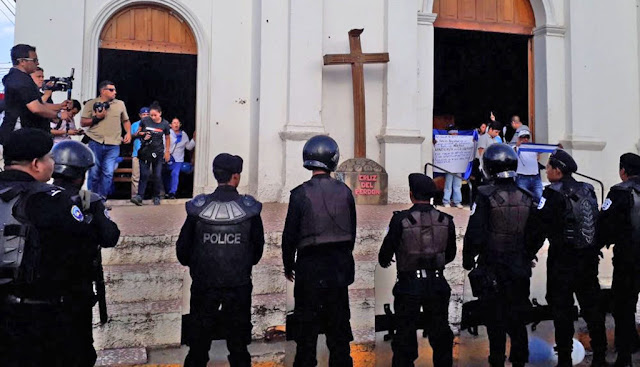 AMERICA/NICARAGUA - Strengthening of police and army controls on the activities of the Catholic Church
Friday, 15 November 2019 Masaya (Agenzia Fides) - "The world sees and knows that there is no freedom of worship in Nicaragua!" says Father Edwin Roman, parish priest of San Miguel parish of Masaya, who cannot enter the church because is blocked by police and army members. Videos circulating on Social Media denounce the ultimately even stronger repression against the Catholic Church in Nicaragua by law enforcement. "We just want to celebrate a Eucharist", says Father Edwin Roman in a video, addressing the more than 30 agents who surrounded the church yesterday afternoon.
The mass, planned in particular to give comfort to mothers and relatives of political prisoners, was then celebrated without most of the family members, who were denied access and who remained outside. Only a small group, who had arrived early, managed to enter the church.
It is not the first time that the police follow or prevent the normal activities of the Catholic Church in the city of Masaya. The monthly meeting of the priests took place on November 12, but the venue of the meeting since the early hours of the morning was surrounded by policemen who prevented some of them from entering.
Father Edwin recently, speaking on television (see Fides, 17/10/2019), recalled a reality: "The attacks that the Church is experiencing today exceed the attacks of those who were victims in the 1980s during the civil war in our country. In the 1980s there was the dictatorship of Somoza, this instead is a dictatorship against unarmed people".
Through Twitter, Father Roman showed the messages with the death threats he received in recent days, including one recalling the assassination of Archbishop Romero: "What happened to Mgr. Oscar Arnulfo Romero in El Salvador, must happen to you, a bullet is waiting you ...". (CE) (Agenzia Fides, 15/11/2019)